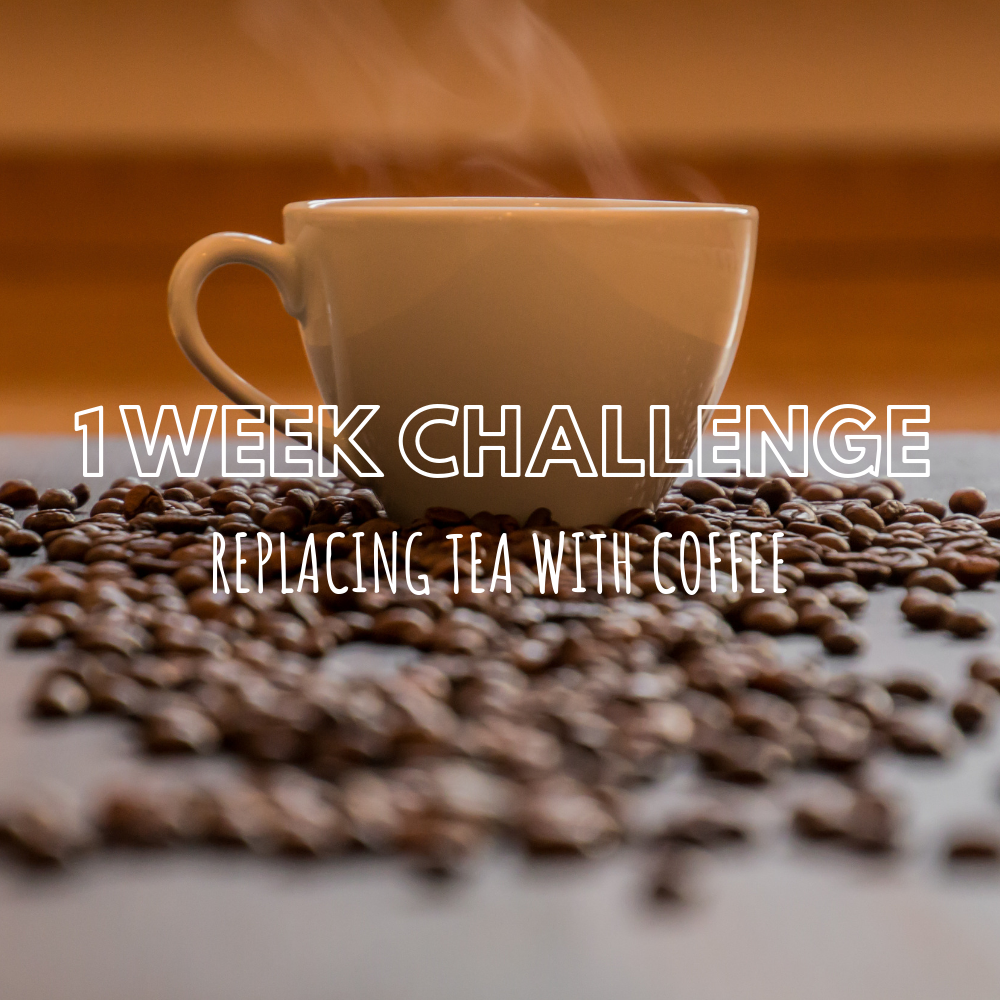 I am going to clear the air really quick: I strongly dislike coffee. I think the taste is not satisfactory and too strong. I am 100% a tea gal. But I decided that there must be something I am missing. Millions of people choose coffee over tea every morning and there must be a reason for it. I recently did an article, Caffeine: Tea vs. Coffee, which showed the caffeine content in both coffee and tea. Coffee analyzed how bean type, roasting style, coffee type, and brewing method affected overall caffeine content, and how caffeine in tea is affected by growing conditions, type of tea, and how long it brews for. Check out the post if you haven’t, it might bring further insight into this post.

However, I am not replacing all tea with coffee. I am limiting it to one cup coffee in the morning to see how it changes my morning routine and start of the day. Personally and health wise, I could not even do multiple cups of coffee, that is too much caffeine for my body to handle. I do not want to risk my health by getting overzealous in a challenge. So, a small disclaimer .

Day 1: I had almost forgotten that I was going to start this challenge and went to go start boiling water in the morning for my tea. But luckily, I remembered in time and went downstairs to do a quick Keurig coffee. I used Kona Bean Co. 100% Organic Medium Full Roast. However, I put a lot of chocolate in the cup and some cream to try and mask the coffee flavor. Immediately after finishing the cup, I felt a slight pain on my right side. Could be unrelated, could be gas, but I feel like I need to report it all. I actually was quite alert and engaging in my class, and even went to the gym after. I don’t think I really experienced a crash and felt pretty energetic throughout my other classes. So, that was a pleasant surprise.

Day 2: I decided I was not going to tell my family I was doing this challenge. So far, no one has noticed. Which is kinda surprising because I am drinking coffee out of a clear container currently and usually my black tea does not look this dark or creamy. My morning brew is Blue Roastery Jamaica Blue Mountain Medium Full Body Roast Coffee, and it tastes stronger than yesterday’s cup. I barely slept last night, so I really need the caffeine and am hoping this helps me get up and running. (Update: My mom has a nose for coffee and figured it out)

I do not think my stomach was ready for this challenge. I ate some not so healthy food, and it felt like a battle in my stomach. The combination of coffee and ramen was not a good choice. But I didn’t notice any crash from the coffee and I had enough energy to do my workout later in the day. It also should be noted that I naturally have a lot of energy so, there is a possibility that I am just super energized in the morning and then just slightly less energized once the caffeine wears off.

Day 3: I chugged the cup of coffee down. I chose not to take my coffee to go, mostly because I do not want my tea to-go containers to smell faintly like coffee when this challenge is over. My coffee was Cameron’s Coffee Kona Blend – Light Roast, but the Keurig cups. (The link is for the coffee beans which is significantly cheaper) The K-cups were so interesting because they were eco-friendly with a mesh bottom instead of plastic. I felt energized, but a little unmotivated to workout later in the day.

Day 4: Wow, never thought I would say this, but I actually had a really good cup of coffee (mixed with chocolate and cream). However, saying that, I was absolutely dead-tired during my class this morning. It makes me wonder if I would’ve been even coherent if I hadn’t had caffeine this morning. I had coffee from freshly ground coffee beans instead of a Keurig cup. It was Hawaiian Gold Kona Blend Coffee. I noticed yesterday and today that I have been feeling extremely thirsty/dehydrated throughout the day, so much that I have been chugging water throughout the day.

I think my body is really missing my morning tea, since starting this challenge I have been feeling quite a bit of abdominal pain after drinking. Maybe everyone’s body is not for drinking coffee. I am still trying to drink tea later in the day and a lot of water, but it is amazing to me how different I feel with coffee in my body. I think with tea, I feel lighter and evenly energized. Even though I am not crashing after drinking coffee, I feel more of a weight in my body. Very odd.

Day 5: I think I might be slightly getting used to coffee, but considering I cannot drink coffee straight without cream and chocolate, I might not be fully used to it. I miss my morning green or black tea. Tea just really lightly gives you energy, where coffee seems to be aggressively shoving caffeine into my system. My coffee was a Hazelnut Coffee, which honestly I did not taste that much hazelnut (to my mom’s disappointment). Each day so far, I did try the coffee without any additives before adding the chocolate and cream. I wanted to give each cup a fair chance, but I just could not stomach drinking black coffee.

Day 6: I decided to try something different than coffee with chocolate and cream this day. I made (in the Keurig) a French Vanilla Cappuccino. I drank most of it before going to do a Clean-up Volunteer project. I was super thankful for all the caffeine I had to keep me going during the project. So far, I haven’t experienced this “crash” I have often heard of people getting. After polling some friends, I realized that many of them did not either. I would be interested in knowing if any of you experience this “caffeine crash” after drinking coffee. Let me know in the comments!

Day 7: The last day! YAY! This challenge has given me some major insight into why some people enjoy coffee. As I raided my parent’s coffee stash for the last time, I found my brew, Lavazza Classico Medium Roast Coffee. I paired it with a lot of chocolate and cream, and I was ready to go onto my day. At around 1, I became jittery. My hands were shaking, and I was doing homework but wanted to run around. Looking back at this week, I drank the majority of the coffee on an empty stomach. This might have been why I was having some stomach issues during this challenge. Either way, I was so glad that I would be able to go back to tea soon. I realize that because of my busy schedule, a majority of my tea drinking is during the morning or late at night. So, instead of my normal 2+ cups a day, I would be lucky if I drank more than one.

I am not going to lie, this was an extremely hard challenge for me. But one that I think is really rewarding. I never really understood the idea of coffee, or why people crave it, even though it tastes disgusting (my opinion). I think by doing this challenge, I get a better understanding of some of you who read my blog. Some people might switch back and forth between coffee and tea, especially in the morning.

Feel inspired? Want to try it yourself? Do it and let me know how it goes! Happy Brewing!

Studying and digging into the Mt. Qinglong Gong Ma