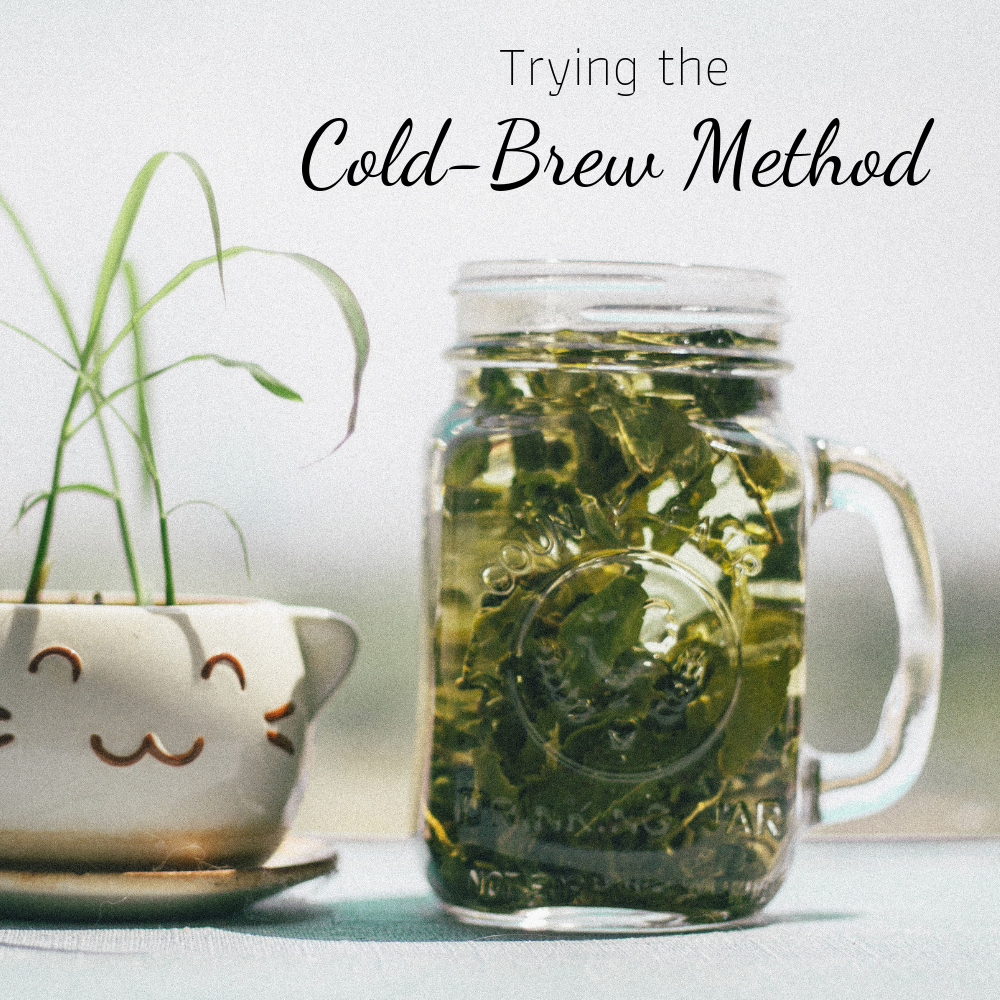 I have previously touched on making tea in the fridge in my article, Family Traditions | Making Sun Tea. While I learned it was a safe alternative (instead of making tea in the sun), I had not fully tested this method of brewing tea. That is completely unacceptable and I refuse to live in the dark anymore. So, I went on the internet and started further researching the cold brew tea method. The first thing I learned is that I am making iced tea completely wrong. The best way is to cold brew the tea instead of brewing hot tea and then putting that in the fridge after it has finished brewing.

In basic terms and ideas, hot water accelerates the flavor release of the tea leaves. Room temperature water allows the leaves to slowly release their flavor without the release of certain chemicals or aspects of the tea which could make the tea bitter. Apparently, when you cold brew, the tea is not able to be over-steeped. Which leads me to think that the temperature of the water is really the key; if the water stays the same temperature the whole time, maybe the tea steeps evenly and then magically stops steeping. Hot water has many variables when steeping like time and temperature, but also hot water slightly cooks the leaves which can lead to the bitter taste after a while. The hot water literally changes the chemicals composition of the tea leaves. Supposedly, cold brew teas also are lower in caffeine and antioxidants. I have yet to decide if that is good or not.

I wanted to test the difference between different teas when cold brewing different kinds of teas, but respectfully, I do not have enough room in my fridge to brew every type of tea. So, I chose my two go to types: Black and Herbal. The black tea was the Tea India-Ginger Chai Tea and the herbal tea was from Mackinac Tea & Spice-Leelanau Wine Berry Tea. I also want to see if the tea is brewed differently if the leaves come in sachet form or loose leaf. The Ginger Chai Tea came in sachets and the Leelanau Wine Berry Tea came in loose leaf form.

Each type of tea has a different type of brewing time needed. Keep in mind, this is most likely the minimum it needs to be brewed. If you brew it that time or 20 hours, it will taste the same since it cannot be over-steeped (within reason). I made a chart to help show the different times for different teas.

The “recipe” is the same as it is brewing a large pot of tea. Rule of thumb is for every one cup of water, use one teaspoon of tea leaves or one tea pouch. I ended up getting large containers and filled each with four cups of purified, room temperature water. I then put the proper amounts of tea in each container and put those in the fridge. Super easy, right? I then waited a few hours and then went to bed. I would see in the morning how the tea fared.

Bright and early, I woke up craving some Ginger Chai tea. As I happened to be running late, it was the perfect time to simply pour myself some tea and go. I ended up not taking out the leaves until after work since I was short on time. It was much harder to take out the loose leaves that were floating around in the one tea. I ended up pouring the tea over a strainer into a large measuring cup. I then just transferred the liquid back into the original container after pouring myself a glass, of course.

I will say, it was quite an adjustment to drink cold tea in the morning instead of hot. But I really enjoyed the result. The Ginger Chai was perfectly brewed like they said it would be. The only difference was that the tea was slightly lighter tasting than the hot version. I did not realize that there is a heavier taste in hot tea, to be honest, it is hard to notice anything until the hot and cold brewed teas are compared side-by-side.

I did not notice any quality difference between brewing the sachets and the loose leaf teas. They both seemed to perfectly brew and taste exactly as they should.

So there we are! Cold-brew tea, who would have thought? Have you ever tried this? What was your experience with it? Drop me a comment! Until next time, Happy Brewing!

I am trying to introduce my fiancè to some teas t

This is definitely the latest that I have drank Sh