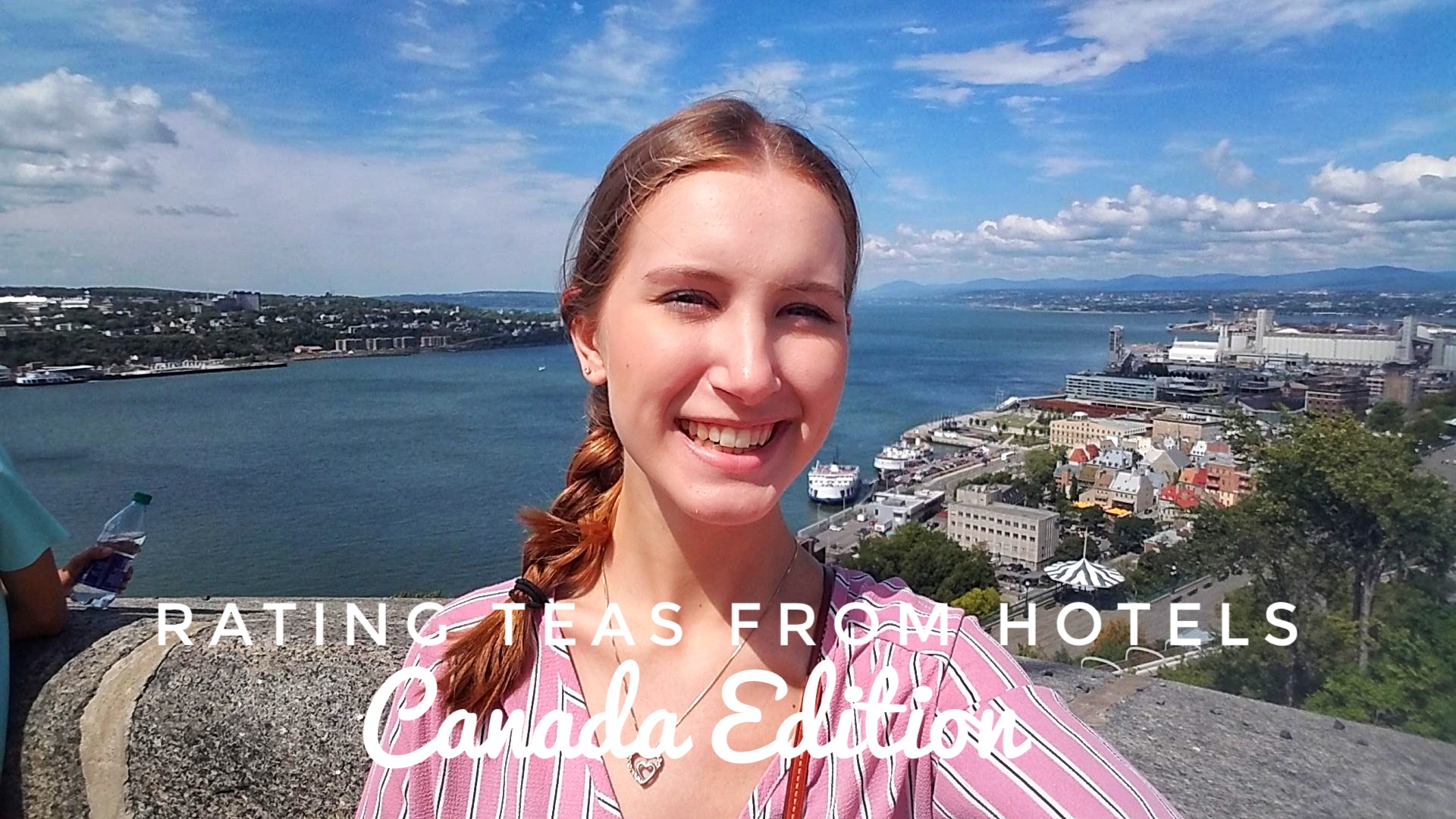 I recently vacationed in Canada and wanted to think of different ways to continue to blog while not stressing about it. I came up with this idea when I walked into the first hotel room: why don’t I show and rate the teas that come in the hotel rooms? For tea fanatics like myself, the teas in hotel rooms usually do not make the personal cut for my morning drink and instead I opt to bring my own. But some people just rely on what is there. Here is what I thought of the tea variety and quality at the hotels:

Day 1 & 2 – Albert at Bay Hotel: For day one, we had arrived in Ottowa. Immediately I sought out what tea options they had provided in the hotel (I had brought my own, but I had this idea for a post). There were four individual sachets of Red Rose – Orange Pekoe Tea. I drank the tea the next morning. It brewed a very nice orange, amber color. For the tea itself, I did not think it was anything special. It kinda tasted lower-quality unfortunately, but it still did the job of waking me up in the morning. I was quite upset, however, when the hotel did not refill the teas the next day. I was hoping they might have a different tea to share.

Notable Teas: I had a mint tea after my dinner the first night. It was nothing super special, but I was cold so it did nicely warm me up! I bought some maple black tea, which I tried as soon as I got back (with our travel-sized water boiler). It was a very nice, full-bodied tea with some nice sweetness at the end of the tea.

Day 3 & 4 – Doubletree: So we moved on from Ottawa and traveled to Montréal. One flat tire and one delicious Chai Latte later, we were at our next hotel. Again, I wondered what teas I would find for me here. I have noticed that hotels and restaurants in Canada really acknowledge the tea drinkers and make sure you are able to get tea everywhere (Even the Tim Hortons here have its own line of tea, but I have never seen that at the Tim Hortons at home). The hotel provided the room with one black tea and one green tea Keurig cup, with no specifications of what kind of tea it is. I am always hesitant to have tea via Keurig cups, I feel like the steeping is always weird and can be easily overdone.

The green tea tasted a lot like the tea you get when at Japanese Restaurants, I really cannot explain it any more than that. It must have been a Japanese roasted green tea. There is a unique taste to their teas that I have never been able to track down and this tea was exactly that. The black tea was more steeped than I would have liked, but there was no way to really prevent that. These teas tasted quite basic with little complexity to them but did taste of better-quality tea than the last hotel.

Notable Teas: On a boat tour, I had a Ginger Pear tea from the brand La Cour Tisane (The Herbal Tea Shop). It was Quite delicious and I realized that I really like pear teas. It was full of flavor with the pear taste the strongest and then there was a spiciness to the tea that really finished the entire thing. The next day at lunch I had an Earl Grey Tea from Four O’Clock. It was very delightful as well. My water came in this lightbulb type thing which I had never encountered before, so this was fun to interact with.

Day 5 – Fairmont Le Château Frontenac: It was our first day in Quebec City, and this hotel was absolutely beautiful! I had high expectations for the tea selection here, however, I did not get to try the teas right away. Originally, I only had three teas to choose from and only 2 cups. Obviously, that did not work in my favor when traveling with three other people, as when I went to make tea, the cups were all dirty. So, we ended up asking for more cups and in result got more tea and coffee. So I ended up with two Oregon Mint Teas, one Sencha Green Tea, one Bella Coola Punch Tea, one Creamy Earl Grey Tea, and one Jasmine Green Tea. I ended up with quite the variety, all from the brand Lot 35.

I have only tried the Jasmine Green Tea, and it was very delightful to drink. The jasmine was a great compliment to the green tea and did not overwhelm the drink. Due to the quality of the first drink, I am sure that the other teas are of the same great quality and will take my time drinking those. During breakfast at the hotel, I had tried their Breakfast Tea and their Oregon Mint Teas (I had 2 cups of the first, and 1 and a half of the second). Since they are the same brand, I thought it might be nice to include them.

Notable Teas: Besides the giant teapot I had at breakfast the next day, I had a London Fog in the evening. It was beautiful. I believe it just had Earl Grey Tea, Vanilla, and Almond Milk in it. My whole family tried the tea and agreed that it was extremely well done. My only complaint was that the sachet of tea was still in the cup and I did not want to pull it out because most of the almond milk foam would come out with it.

Day 6 – Hotel Champlain: We stayed in Quebec City for another day but had different hotel plans for the second day. It was quite odd that the tea was not in each room, but in the lobby of the hotel (there wasn’t a coffee machine in each room either, so I felt slightly better there). There was a fun variety and I actually recognized some of the brands from teas I have had in restaurants here. There were three teas from the brand La Cour Tisane (The Herbal Tea Shop): Refreshing Mint, Lemon, and Chamomile Flowers. Then there were three teas from the Brand Four O’Clock: Green Tea, Earl Grey, and English Breakfast. And then we have good old Red Rose Orange Pekoe Tea.

I had already tried the Earl Grey tea and the Orange Pekoe tea, so I did not even focus on trying them again. I set my sights on the Lemon, Mint, and Green Tea. I was extremely interested in seeing if I liked the other teas from La Cour Tisane as much as I had already liked the ginger pear from before. The lemon tasted quite nice, full-frontal lemon assault, to be honest. I really did not mind because the tea tasted very fresh and almost like I had added fresh lemon myself before drinking.

Day 7 – Quality Inn & Suites: Our last night was in Kingston, Ontario. The tea provided was just normal standard Lipton and even some Red Rose. I am unfamiliar with the brand Mother Parkers, but since being back from vacation, I have not tried the tea. I drank some English Breakfast Tea, but apparently I did not drink it fast enough. While we were packing up our bags, my mom accidentally threw away my tea instead of her coffee (how she confused the two, I will never know). The tea was just normal tasting tea, honestly, nothing super special. So, I will keep this section short.

So in conclusion, Quebec City has some great tea variety and quality in hotels. I was not a fan of Red Rose pekoe tea. And that it is very fun to actually pay attention and document what teas are offered where and discovering new brands! Please comment any fun tea finds you have found when traveling! Happy Brewing!