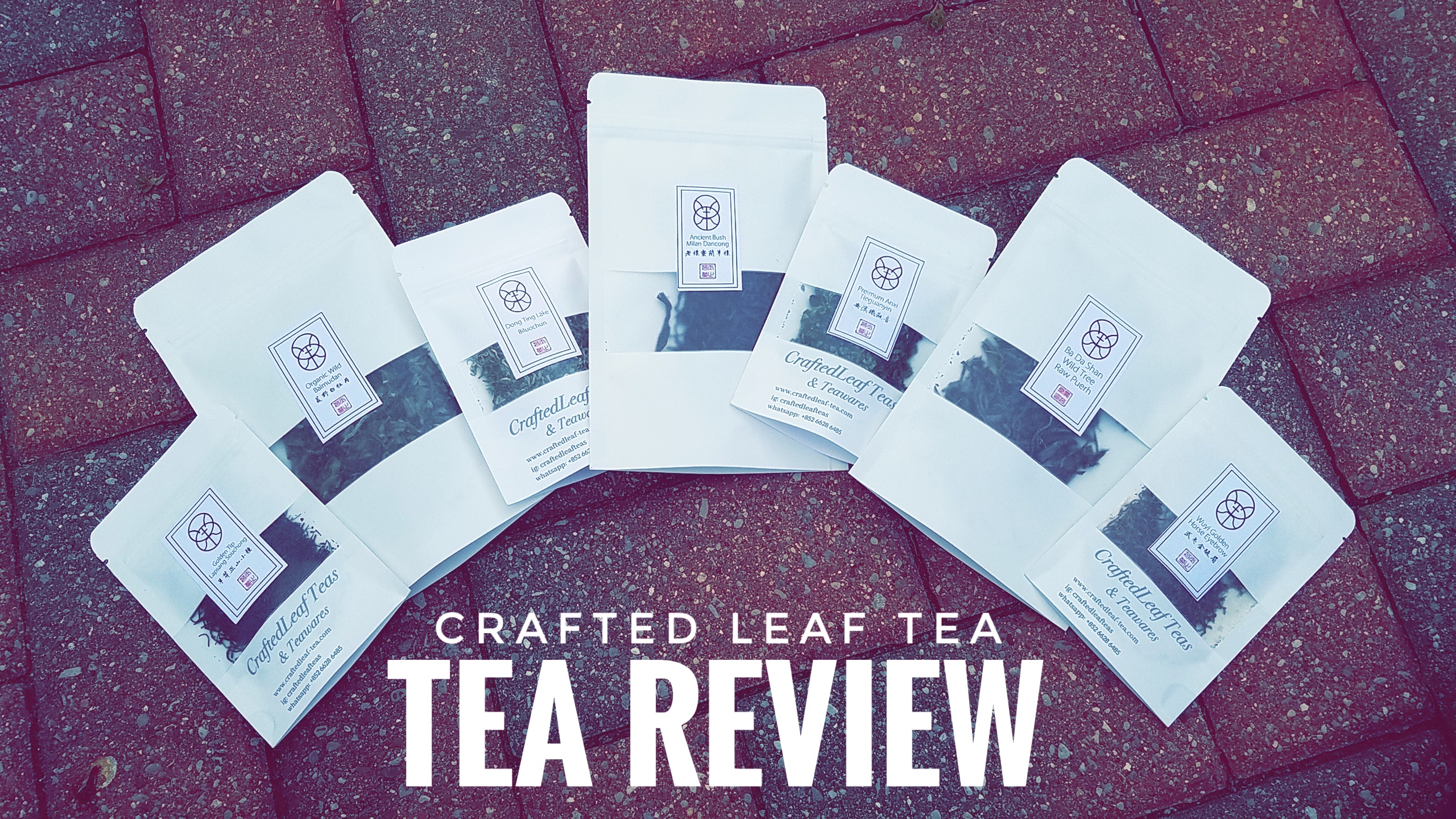 On September 9, 2019May 16, 2020
by Danielle
in Tried & Tasted
Leave a Comment on CraftedleafTeas Sample Kit Review

I am getting obsessed with these different kinds of teas. While I absolutely love getting different kinds of tea blends, I am getting more and more into authentic teas and where the tea is grown or how it is processed can bring out entirely different notes. So when I had the opportunity to learn more about these teas in a sample kit from the company Crafted Leaf Teas, I was so excited!!

2019 Spring Golden Tip Lapsang Souchong: Right away, I was intrigued by this tea as it is my favorite kind, Lapsang Souchong. I was expecting a very smoky tea taste but instead got a black tea with an interesting nuttiness to it that I was able to identify right away. There is an undercurrent of sweetness as well, which was quite interesting to taste. For all of the Lapsang Souchong Teas that I have had before, it was interesting that this one lacked the noticeable smokiness that usually comes with this tea. I was very impressed however with the smoothness of the tea and lack of bitterness. From further tasting, it seemed like there was a slight floral taste hidden in this tea that I could slightly taste. I was very impressed with the entire tea experience and it put me in a good headspace for work.

2019 Spring Song Dynasty Old Bush Milan Dancong Oolong: There was a time that I thought that creaminess in a tea did not exist, but this tea totally proved me wrong. With every sip, I could taste this rich creaminess that settled on the palette. As the tea cooled down, the different notes in this tea became more and more apparent. At first, I could taste a tiny bit of nuttiness to the tea, but it seems as if it was more hidden as the tea cooled down as well. Instead, a slight sweetness was drawn out in each sip. There also was a slight sweetness to the aroma as well as a scent that I could not necessarily place. The color of the tea was a beautiful amber color.

2019 Spring Dong Ting Lake Biluochun Green Tea: This tea was extremely light tasting and was very hard to pick up on individual notes in the teas. After steeping another cup a few days later, I stand by my previous statement. This tea had a light tasting, slightly vegetal flavor and aroma. I am going, to be honest, I do not know what a fried bean tastes like and I do not know how it could be sweet…or present in this tea. I really only tasted the light vegetal taste of the green tea.

2019 Spring Premium Anxi Tieguanyin Oolong: The smell of this tea was slightly floral and vegetal, with a hint of slight creaminess. I was very impressed by the quality of the leaves and how much they expanded! They were absolutely beautiful, however, when I made another cup at home, not in an infuser, the leaves did not expand as much. They did not completely unfold, even after a few steepings (maybe because I could see more without an infuser than when I had one)! Oolong always gives off a floral taste and aroma and this tea was no exception. Each mouthful was full of different notes from this tea, it was more complex than I had originally tasted.

2017 Ba Da Shan Wild Tree Raw Puerh: This tea was quite light, honestly almost tasteless even though I had steeped the tea in boiling water for 3 minutes. Which is the temperature and time that I normally steep Pu-erh tea. I will try again, but I was quite confused that this tea had no taste to it, even though the leaves had expanded and there was a very pale brown color to the tea. WOW! Steep 2 for the win. This had much more flavor than I had expected especially since the first steep was so void of flavor. There was such a strong fruity taste right away, I was trying so hard to determine the exact taste. I then recruited my brother to help identify and we thought that the fruitiness was either raspberry or apricot. Very different tastes, but we just could not determine the answer. I was very impressed and I take back anything negative that I said at the beginning of this paragraph. The leaves were nicely unraveled, and perfectly whole. I think I like raw pu’erh tea more than ripe.

2019 Spring Organic Wild Baimudan: This tea gets yay from me and a nay from my mother. However, as a disclaimer, she does not like pure green teas, but prefers green teas with other ingredients that compliment the green tea taste. I really dug this tea. It had a beautifully smooth taste with a vegetal note shining through in the middle of my palate. Near the end of the tea, I could taste a slight sweetness which lingered a tiny bit. The website stated a rose note in the tea as well, which I only tasted after reading that statement. Sometimes looking up the companies notes help reviews and being able to verify if I can taste certain notes or not. The leaves beautifully unraveled and were very much whole.

2019 Spring Wuyi Golden Horse Eyebrow (Jin Jun Mei): This tea had a very smooth taste (compliments to the brewer…me!). The tea itself had a creamy taste, with a slight tannin black tea taste. I brewed it in my mini teapot and dished out samples to myself and my family. The smell of this tea was quite a floral aromatic smell, again with a slight hint of black tea. I did not notice any sweetness in the tea, as their website suggested. Perhaps it would have come out more in second or third steepings, but the flavor was simple and beautiful. I honestly think the aroma of the tea was more complex than the taste, but that is just my opinion.

Wow! That was a huge review! This was especially a hard review to do since a lot of the tea was caffeinated. Usually, I come home from work and drink some tea and write. However, when many of them are black tea and caffeinated, it took a lot longer to try and fit in all of the teas and then review everything with the dedication I love to give to reviews. Happy Brewing!