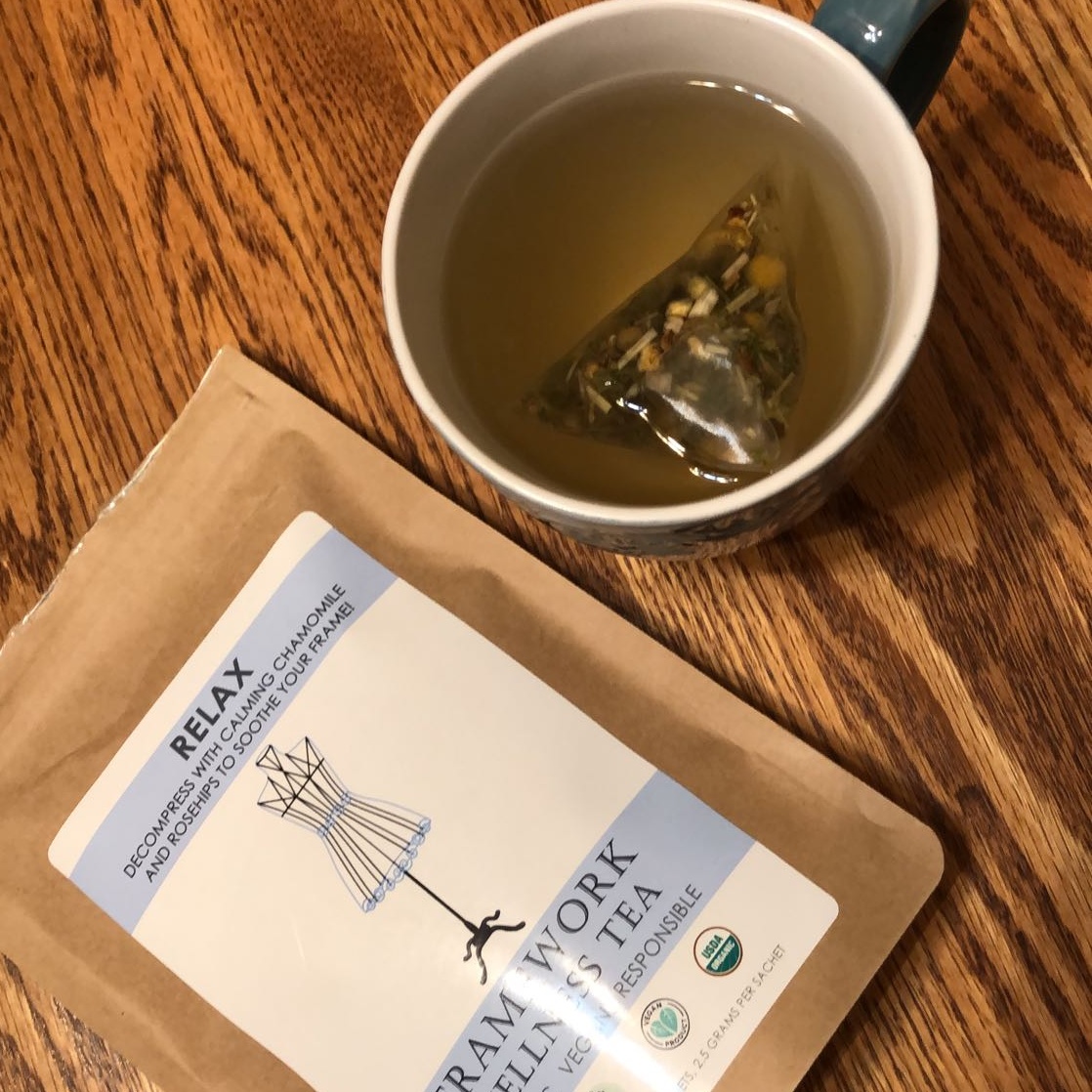 Framework Wellness Tea is a relatively new tea business that was founded by two friends, Sarah and Colleen. From talking in a park regularly while their children played, they found that they had a love for business, podcasts, and health. And Framework Wellness Tea was founded. I started reviewing these teas by myself, but when I had the opportunity to share the reviewing process with my mom, sister, and brother-in-law, I was so excited. I broke out 4 mini tasting cups and brewed away, and then took notes on the little comments everyone made. It was a fun reviewing process; here is what we thought:

Analyzation of the Teas:

Inflammation: I drank this tea after a minor gum procedure on my mouth to try and soothe the inflammation that was present. Honestly, I think my mouth being in pain stopped my brain from working because I was just hopeless at picking out flavors and reviewing it. So, during the second taste, I was definitely able to pick out more notes. our collective first thoughts were: Smells like hot chocolate, with a bit of spiciness. bittery earth finish. licorice notes? It was interesting how much of the Cacao Nibs we could taste as well as the natural chocolate flavor. My sister claimed to have tasted the Whole Pepper, which I think contributed to the spiciness profile and earthy finish. I do not know where the heck we tasted licorice from. I did give some of this tea to my aunt to help with inflammation (apparently she took it very seriously and ended up opening a bag to analyze the ingredients with her coworkers), but it was not really a favorite of hers due to the taste of the turmeric. She also did not notice much difference in regards to if it helped with inflammation, but she thinks that if she had consumed it more than 5 days, it could have helped. She also noted that it was quite mild and might take a bit of getting used to.

Relax: This tea was quite soothing and different from other “nighttime” or “relax” teas that I have tried prior. Our first thoughts were: Lavender? Lemon Grass? Soothing on the throat. Citrus notes. Floral aroma. Surprisingly no chamomile taste but chamomile feeling. Mom approved. Well, this obviously did not have any lavender, but there was a taste that reminded my sister a bit of lavender. Probably the Rosehip and Blackberry leaves, and it contributed also to the lovely floral aroma. I could really taste the citrus notes from the lemongrass and just the comfortable feeling of the chamomile. My mom really enjoyed this tea and finished the rest.

Slenderize: I was nervous about this tea. Anything advertised as slenderizing makes me a little uncomfortable, but after reading the ingredient list, I was convinced that I would love the taste of this tea! The first initial thoughts were: Spicyish scent with a citrus aroma. slightly vanilla chocolate. As I tasted this tea, I was reminded of a taste, but could not figure it out for the life of me. Then looking on the ingredient list, I realized that it was ginseng. Once I realized it was ginseng, that was mostly what I tasted with a slight chocolate feeling to it. I like the citrus aspects of all these teas, but this tea was quite nice with a very subtle role that it took. The ginseng really shined through this whole tea, which would be great if you like ginseng and unfortunate if you did not. You can see the sudden difference when there was pu’erh tea in the blend vs not, which I thought was super cool.

Detox: This tea ended up being my brother-in-law’s favorite from the bunch. It had a nice Rooibos taste with some citrusy notes. There was a tiny bit of sweetness, extremely subtle near the end of the sip. It was not terribly complex tasting, but it was extremely palatable and felt good in the mouth. Each sip was calming and quite relaxing. The aroma was also fairly complex, a mixture of rooibos and slight citrus. My sister and I argued about the ingredient cornflower. I insisted that I can taste it and she claims you cannot taste it ever. Who will win? I still think I could taste it and that I usually taste it in other teas as well. The interesting thing about this tea was that it is different from most detoxes that I have tried or encountered. Normally the detox tea is a bit spicier and has ginger and black pepper, but this tea it did not. Honestly, I would go for detox teas more if they all tasted like this one.

Analyzation of the Price:

Each tea sells for $18, for 14 individual pyramid sachets. That calculates to $1.29 per tea. I do think the price is a bit high, but considering that the ingredients are organic, the bag is biodegradable, and the sachets are waste-free (without string, staple, or tag), I think that makes up for the slightly increased cost.

Analyzation of the Packaging:

The packaging was a 10/10. The teas came in a nice heavy duty branded box, then wrapped in tissue paper. As you can see in the unboxing video to the left, it was adorable (sorry about the writing on the video, my original video was deleted on my phone and that was all I had). The branding was just so beautiful, I was blown away. The tea itself was in nice sturdy pouches and looked to be mostly airtight (I could smell a bit of the teas at the top of the packaging though).

And there goes another review! I was quite excited about this review just based on the branding alone, and I think that it was a general consensus with my family that we really enjoyed these teas. I will see you guys in the next post! Happy Brewing!