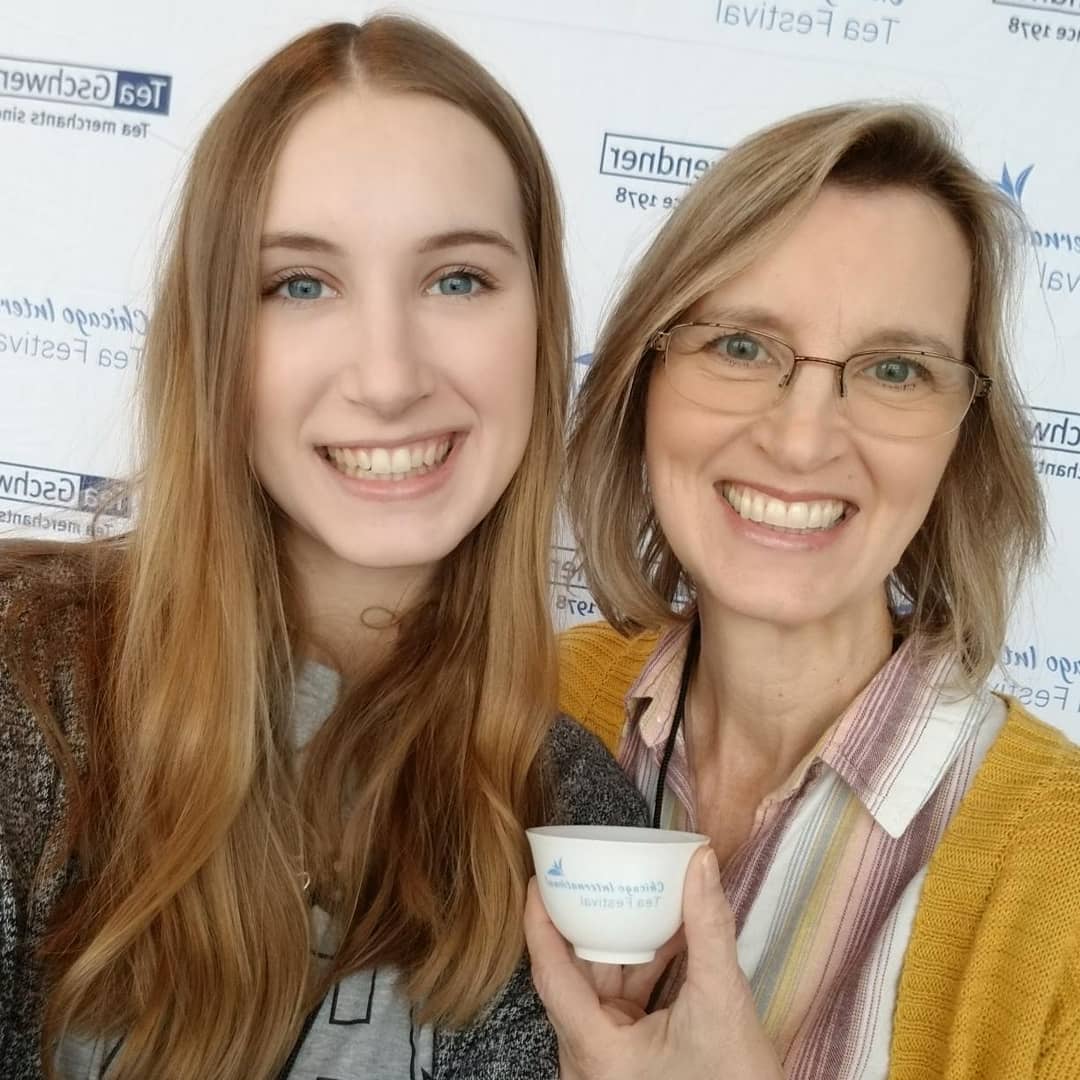 This was so difficult to write. Procrastination was extreme and real. I did not know necessarily how I wanted to write this, and how I wanted to explain the festival. But I know I want to start out by saying, I loved it so much and it was the highlight of 2019, I really hope it comes back next year, and CONGRATULATIONS because 1200 plus people showed up. So, with that said, here was what happened:

From October 31st to November 3rd, I attended my first tea festival. Of course, I took my mom. And since I took my mom, my dad also accompanied. And then my brother also wanted to tag along. Needless to say, we had a full car on the drive down. I had received two press passes to cover the event and decided to give my other pass to my mom, who plays a big role in editing posts and using her advertising background to help my pictures here.

We drove down to Chicago Thursday Morning, stopping in Michigan City, and taking a bus into Downtown Chicago. We left around 6:40 am and made it into the city around 12:40 pm (with consideration of the 1 hour time change). This day before the festival was absolutely miserable, with snow beating down on our faces as we rushed around the streets, trying to find out hotel. We ended up shopping after figuring out the subway system (we are country-folk, it took a bit). Thursday night, my mom and I started planning our first day at the festival. We even added a Darjeeling tasting class so we could have more to do before the opening ceremony, a nice and easy $5 spent each. Then, we both rushed to bed very excited about what the next day would bring.

The next morning, we both woke up bright and early so we could get to the hotel at 8 and sign in. As we did not know what we were doing, we ended up wandering the lobby for about eight minutes, until we finally looked at a map. After registering and looking around, we decided to look for the classroom of our first class, Darjeeling Teas: Sample Tasting 2019. We then found out that the time online was different than the time on the board and we were actually 10 minutes late to the tasting. No worries though, we were not the last to stumble in late. The class speaker was James Orrock from Single Origins Tea and together we tasted four different teas.

The first tea was a white tea called “Moondrop”. Only 33 Kilos of this tea was made this year. I found the tea quite smooth and was unable to detect any astringency. The color was quite golden and beautiful, with floral notes in the aroma. James was very interesting, where he did not time the tea, but based the tea on how the lid was scented (something I could not do at this time). The second tea was a black tea called WonderTea. It tasted quite smooth, but I was not as excited about this tea as the last one. It had a beautiful golden color that was similar to the first tea. Both the first and second teas were first flush. The third tea was….interesting. It was a 2nd flush black tea called Balisun (spelling?) from the Risheehat farm. It just was a wonky tea, with dusty smelling leaves a high astringency to it. The tea also left a dry feeling in the mouth, which I never like. The fourth tea was a mixture of Silver Thunder and Exotic White (both first flush). This tea was golden in color, with a nice creamy feeling from it. There was also a slight astringency when swallowing, but not when you first sip the tea.

From there, we honestly just chilled around for another hour until the opening ceremony (which was 15-20 minutes late). In that time, we met a fellow tea blogger, Marco from Steapd. Shortly after, the dignitaries started the ceremony and shared a cup of tea in friendship. It was pretty cool to see all the dignitaries from Taiwan, Japan (the featured country), South Africa, Germany, Austria, Sri Lanka, and Nepal. From there, we went down to taste more tea and talk to the vendors!

It ended up taking about 4 hours to go through the vendors in the main room, we saved the outside few for the next day. I finally experienced the term “tea drunk”, as I stumbled to the last vendor and incoherently mumbled and stuck my testing cup out…I honestly felt a little bit bad for the tea vendor as I did not give them my full attention, which was not a possibility at all. Please refer to my large collage of tea pictures which just shows how much tea I had consumed (sooooo many more mini cups not pictured).

I think the most interesting thing that I experienced was meeting all the people I chat with online, in person. And after all of the discussions I had with bloggers and vendors alike, I started to feel more confident in my tea knowledge and lack of knowledge. People were so happy to share what they knew so I could expand my understanding of teas or tea processes. It was then that I wanted to be on the Tea Bloggers Roundtable (which I had previously decided to not be on), so I reached out to the bloggers and they were quite welcoming. I also showed off my tea haul from day one, which largely consisted of free samples that I was given. Some people found out that I was one of the bloggers covering the events and subsequently brought out more samples for me.

We ended the first day (first day of the tea festival, second in the city) around 4 and met up with an old family friend for dinner and exploring around the city. We also found out that floor 96 in the old John Hancock building is a bar, and the price of a drink is way cheaper than the expense of a ticket to go to Chicago 360 on the 94th floor. Just a tip. Also, the girl’s bathroom has the best view that I have ever seen from a bathroom.

The second day was more focused on classes and learning more about tea (of course). My brother and dad decided to stop into the festival to look around at the vendors, and my mom and I joined in for the remaining vendors that we wanted to visit. It was definitely busier the second day. I was extremely happy that I had these great conversations with the vendors the first day, as I probably would not have gotten as great of relationships out of it from talking the second day.

I had another class at 11:30 that was an Intro to Cupping class, which was taught by Suzette Hammond from Being Tea. I honestly had no idea what to expect. Was I going to learn about cupping like tea traditions? Or something completely different? It ended up being a class where you learned proper ways to standardize a tea comparison, and then pick out astringency, aroma, body, and other aspects of the tea. We were split into groups of four and then we each blindly prepared a different tea to analyze. It was interesting that no matter what, the water temperature was boiling and the steeping time was five minutes. It did not matter if the tea was black, green, or white! Crazy to me and many of the teas ended up being crazy astringent but it was ultimately an amazing experience.

It was also interesting because we blindly tested two Hojicha teas (one from Japan and one from India) and then a Dragonwell tea (also one from Japan and one from India). It was so interesting that I was able to identify what the tea was, but I was totally lost on the origin of the tea. But it was definitely cool to be able to identify what they were. During that time, my mom went to her Growing Tea in the US class. I will only brief over this as she explained her class in the blog post: A Season of Growing | Trials, Tribulations, and Teas. The takeaway from this class? If you can grow blueberry bushes in your area, you can grow a tea plant.

Then, the dreaded/highly-anticipated Tea Bloggers Roundtable. The panelists included Geoffery, Marco, Nicole, Me, and Rachel. Marco and I were the new blood on the panel and there were definitely times that I was thinking “what the heck am I doing here?”. I think within the tea community, there are some well-established bloggers who have a plethora of knowledge at their fingertips. While my knowledge has greatly expanded, I am still actively learning and figuring out new things about teas and different kinds of teas. I felt a bit insecure many times since I am not on the same knowledge level as other bloggers, which led me to use humor as a slight shield while on the panel. But it also leads me to share what I love about blogging, tea, and engaging with others in the community. It was absolutely incredible on all levels.

My family and I ended up leaving early on Sunday, around 8. It took just about all day to get back home, via train and driving a car. Exhausting. But totally, 100% worth it. I would go again. I really want to go to another tea festival as these things are so addicting. I still have a plethora of tea samples to go through, as I have barely dented the samples I received during the festival!

I really hope you enjoyed reading about my experience and I hope that if you ever get an opportunity, you get to go to a festival for something that you are passionate about. even if it is not about tea. Happy Brewing!

One thing I deeply miss, is going to tea cafes and