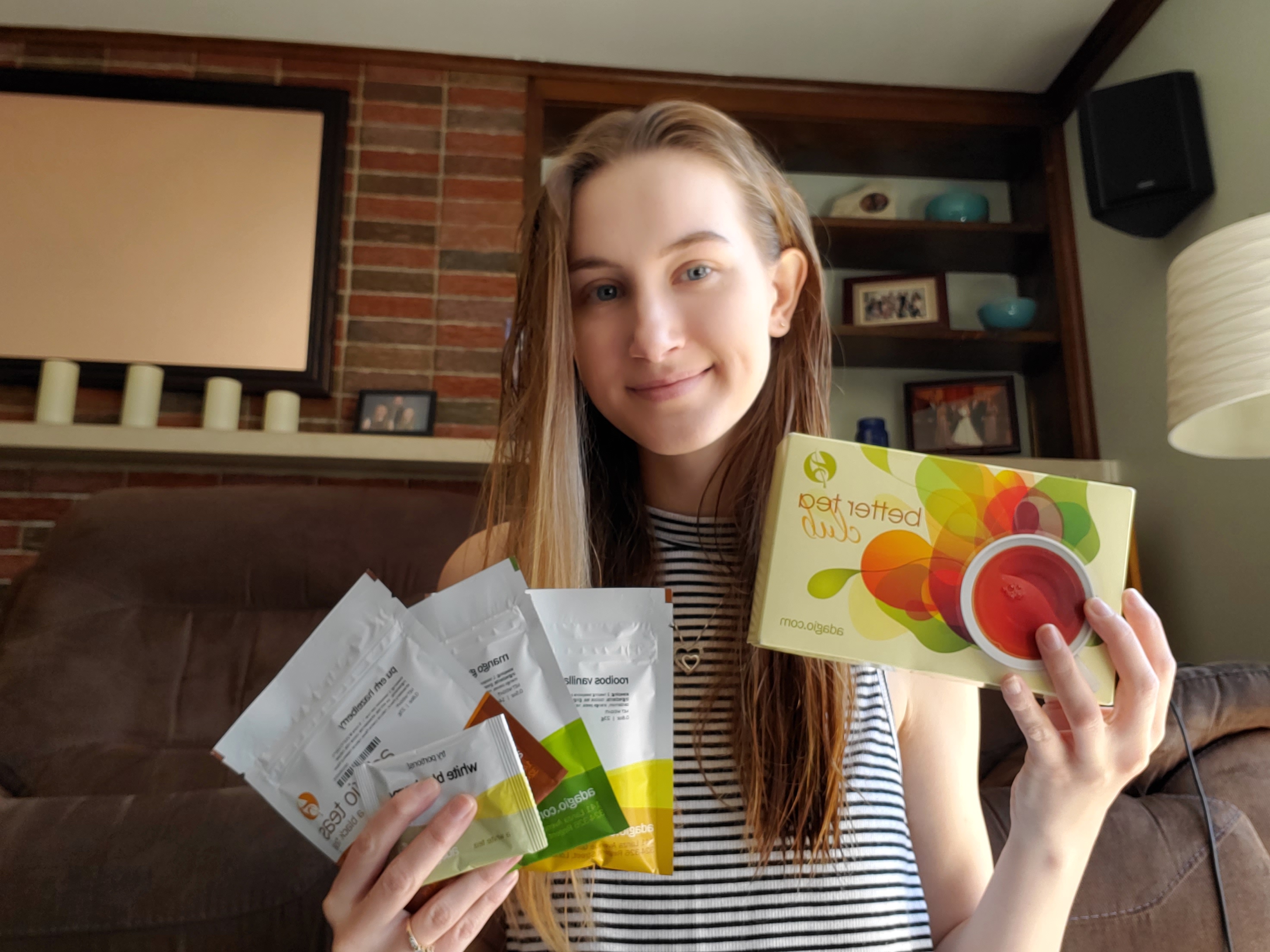 Adagio Teas is a tea company that I see quite often in my Instagram feed as well as my Facebook tea group, so when I had started this series, I knew that I wanted to try out their subscription box. So in the midst of my quarantine and final few weeks of undergrad, I researched Adagio and bought their Better Tea Club – loose leaf tea version. This tea company is a smallish family-owned business who wanted to share their own experiences with tea growing up with others. It started with their mom and now is family run and expanding. As soon as I had my hands on the package (after sanitizing of course), I was ready to start trying them out. Here are my thoughts:

What was the price?

The price was $6.99 with shipping included, which I paid without a second thought. I honestly hate the additional fees that shipping normally brings, so free shipping is always a go for me (Marketing tactic for the win). I was quite eager to finally try Adagio after seeing it repeatedly from other people, so having this good of a price was quite exciting for me. Also, I found this quite funny that they advertised this to me, but there is no sales tax in Michigan for purchases from this tea company (for anyone not in Michigan, there is a 6% sales tax on just about everything).

The packaging was quite minimal which I appreciated. It shipped in the logo decorated box and everything was expertly stuffed in there (so much that I could not figure out how they got everything in there). The tea pouches themselves were plastic like with a seal. I did not notice much aroma coming out of the bag, which was impressive because they all packed quite the aroma punch. They also nicely zipped back up (except for the sample obviously) which made it easier to keep the teas fresh.

How were the Teas?

Pu’erh Hazelberry: The aroma had a ripe pu’erh aroma with hints of hazelnut. It reminds me of tea by retro leaf tea due to the similar taste and aroma. The actual taste was a lot tamer than the aroma, with a delicate balance of the pu’erh taste and a hazelnut flavor. My mom really liked the hazelnut aspect of this tea (she loved hazelnut coffee and was dancing while drinking it). It has a very smooth taste and texture while coating my mouth in an almost buttery feeling. I had this tea with a chocolate banana bread and it was a great combination. The hazelnut mixed perfectly with the chocolate banana taste. I really thought I would be overpowered by the taste and natural flavors based on the aroma of the dried leaves, but I was pleasantly surprised at the smoother taste and lightness of the tea. I could not taste or smell any strawberry in it.

I was going to leave the review like that, but then I did a second steeping (because I hate wasting leaves when they have so much more to give). The aroma is straight ripe pu’erh with a little hint of creamy hazelnut. The taste was quite also prominently ripe pu’erh, most likely because most of the natural flavors were used in the first steeping. But the tea still had some sweetness in it, which really made it taste natural. I kind of wished the first steeping tea tasted like this as I ended up enjoying this more.

Mango Green: This was delicious. The aroma was quite strong from the dry leaves but did not smell quite as artificial as the others. The aroma died quite down when steeping and smelled quite fruity and almost peachy to my nose. The taste was lovely, a nice mix of mango and green tea. I could still taste some elements of the green tea which excited me because sometimes natural flavoring covers up a lot of additional notes in the tea. The mango flavoring tasted quite natural and it made the entire tea quite nice to drink. I felt my body relax as I was drinking it. I think out of the four teas that I have tried from Adagio, this one is my favorite. I really appreciated its natural flavor and ability the calm me down in this hectic time.

Rooibos Vanilla Chai: The aroma of the dry leaves gave me serious pumpkin spice vibes. It was an extremely overpowering aroma that hurt my nose when I stuck it in the bag. The aroma of the brewed tea was much milder than the dry leaves, but it was still was fairly potent. The taste was rather…disappointing. It had elements that were good and there were aspects that missed the mark. It seemed fairly hollow to me. There was a nice wall of spice and cinnamon and gave a nice spicy sting in the back of my throat, but it was not completely satisfying on its own. I think, however, that I might be able to use it to spice some cider. My mom thought there was an artificial flavoring taste to it or something that was a bit off-putting. This was the first of the teas that I tasted from this subscription box, and I was a little sad about this start.

Sample – White Blueberry: The aroma of this tea was quite intense (I am seeing a trend) and did smell a lot like blueberry pie. As the tea cooled down, I was able to get more of the blueberry flavor out and the distinct flavor of the white tea. This does seem to be a fairly natural tasting tea, which I appreciated, but I do not think I would buy this tea. There was something about the way that it sat in my mouth and the feeling that it brought. It was mildly astringent with a drying factor in my mouth. There was a taste in this tea that bugged me a bit, maybe the natural flavors. I recognized the feeling and taste from a tea I consumed before but that was an instant tea. My mom ended up trying it with me and did not mind it, in fact, it reminded her of a blueberry tea she brought back from Alaska.

Would I Purchase from this Company Again?

I already canceled my subscription (which is expected since I am doing a subscription box series), however, this one was a no brainer to me. The teas were a little bit too hit and miss for my tastes and their overall use of natural flavors (and the way it impacted the taste of the tea) was a little extreme for my tastes. It was fun to try this brand though due to the overall good price and little risk, but I have other teas which I would prefer to spend my money on. They also had fairly limited information about sourcing besides their roots campaign (which is limited in which teas have information) and most teas being involved in fair trade. I appreciate the information that they do have but did want a bit more (I guess I am a bit harsher sometimes when that information is not available). I had been advised by another tea friend that their “Masters” tea is very good, so I might try that one when I have time!

What did you guys think? Have you tried Adagio before? What did you like? What did you not like? I really want to know what your opinion is on this company even if it is different than mine! Happy Brewing!

What is the culture of chai? My last article for

@bcbteallc is a Chicago-based tea company that foc