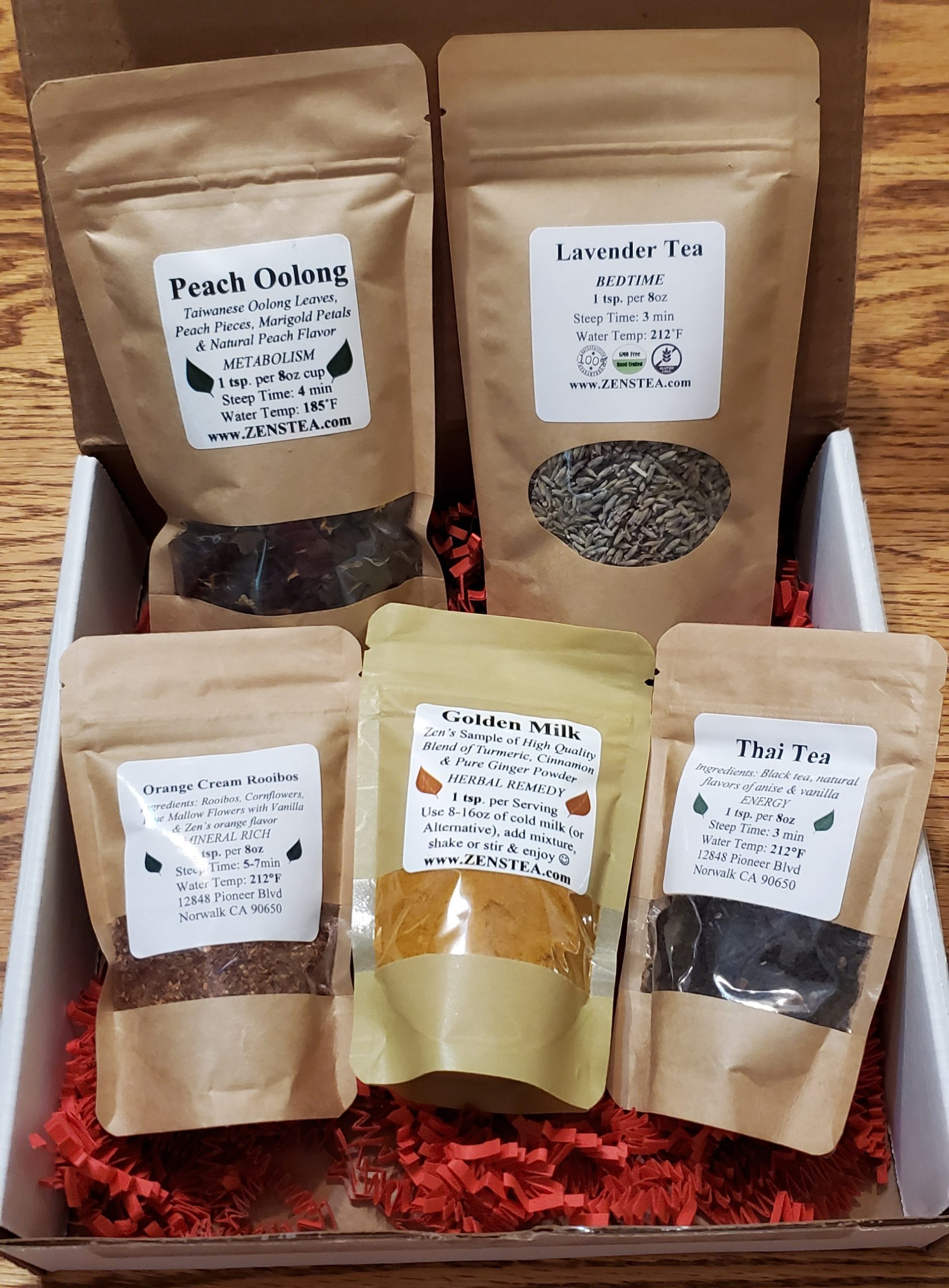 Zen’s Tea believes that the power of botanical medicine, and that it can be simple, cost effective, and safe for consumers. I discovered them through my extensive searches on the Internet and through my searching on Instagram for subscription boxes, and bought their Zen’s Tea Wellness Package which is their monthly subscription box.

What is the Price?

The price of the Zen’s Tea Wellness Package is $16.99. On the website it says 4 different teas but I recieved two large tea bags and 3 smaller ones (because it was my first purchase, I received an extra tea). It also said 4 ounces of tea total, when I feel like I received more than that which was a cool bonus.

How was the Packaging?

The tea came in a branded box, which I always love to see. Each tea pouch came in standard brownish sealed pouches which did pretty good job at keeping in the aromas.

Do they Disclose their Sourcing Information?

So, after a bit of digging on each tea, they do have some sourcing information cited. Mostly talking about the region that the tea comes from, which is honestly better than nothing. But I would like a bit more specific countys or cities, something other than Asia.

How was the Tea?

Peach Oolong: Right away when brewing I could smell an aroma of slight honey-roasted notes, but the roasted definitely took more of a front seat than the honey-sweet. As I sipped on the tea, I also noticed more of the Oolong not so much the peach. The peach is a really far backseat (like my suburban, the third row). I accidentally burned my fingers when doing this tea (I thought it would be fun to use my gaiwan) and oversteeped it right away. As it cooled and I went on to other infusions, and the peach flavor, while subtle, started to come out and was quite aromatic. The peach adds a sweetness to the tea that calms down the astringency and drying. There is not much, but it is slightly apparent.

Lavender Tea: I had to find a use for this tea, as while I do love lavender tea, I really have to be in the mood for it. Since this box was delivered to me, I really have not had a hankering for lavender tea and I was not about to force myself (and it is a single ingredient herbal, not much more to report on). So, instead I made Lavender Syrup. I mixed 2 tablespoons, 2 cups of water, and 2 cups of sugar…approximately. I was coming off of some baking and tea fails the day that I made this, which had me anxious and I ended up pouring more lavender and sugar in. I have only used it once since making since I hightailed on a road trip a few days after, but it did seem to be fairly decent. As long as I can find a use for it, I cannot be mad about the tea that was delivered.
Ingredients: Lavender Buds

Thai Tea: Sweet, sweet smell. Super lovely aroma. I tried to make an actual thai tea with sugar and milk but it was a no for me, I probably would need to make it a concentrate. I tried the few sips that did not make it into the blend, but I really needed to remake it. The vanilla of this tea really just makes the entire brew creamy and gentle. The black tea is not overwhelming which is something that is nice when drinking a black tea blend.

Orange Cream Rooibos: Yum. Yum. Yum. This tea brewed a lovely orangey-red color. I shared this tea with my brother and he went for seconds, so I told him that he has to do this review. So in his words, (before he knew this was an orange cream rooibos) he stated that the aroma was that of orange cream. He really hit it on the nose there. he also noted a buttery flavor coming from the tea, but he thought that was possibly from the cream component. The last this he stated was that there also was a very consistent flavor profile, which I totally agree with. The tea will be mostly the same from first to the last sip, which is good if you need a calming tea or a studying tea.

Golden Milk: I will be honest, I was quite close to just giving away this tea instead of trying it. I have tried similar blends in the past (or so I thought) and did not enjoy them fully compared to other lattes that I could make. However, with that said, I really enjoyed my latte that I made with the powder. There was a spicy element to it, but it was not overwhelming like in blends before. The lactose-free milk and honey might have mellowed it, but the cinnamon seemed to play a larger role which reminded me a bit of Christmas. When I opened the bag, I did the mistake I commonly do: Stick my nose in the bag and take a big whiff. I would not advise that I sneezed almost immediately and felt the sting of ginger turmeric. But the aroma was heavenly. I am really glad that I saved this for myself, this is an absolutely wonderful blend.
Ingredients: Turmeric, Cinnamon, Pure Ginger Powder

Would I Purchase this Subscription Box Again?

I have a few pros and cons. A few good points where the quality of tea and the amount of tea for the price. Two large bags and three smaller ones is amazing (considering one is the extra tea they put in first purchases. Based off of that, I would totally go for another month if I was not on a self-put tea buy ban. But there were a few reasons that might dissuade me from trying again.

So, I have to knock them a few points for a couple of logistical reasons. The number one reason was no signup email. I did not know if my order went through and had to reach out to them through Instagram just to find out if it did or not (it did, obviously). Another reason was the more difficult process of canceling. I created an account after my order, so my order was not (weirdly) attached to my account. I messaged them on Instagram again, and they let me know that to cancel, I just need to send an email. So, I am unsure if I was a unique case, this happens often, or this is their normal cancellation process.

Do you like more tea in your subscription box or more knickknacks in the tea subscription box. I have been trying to find more like the book and tea one, but it is quite difficult to find! Let me know your favorite subscription boxes and any we should try. Happy Brewing!