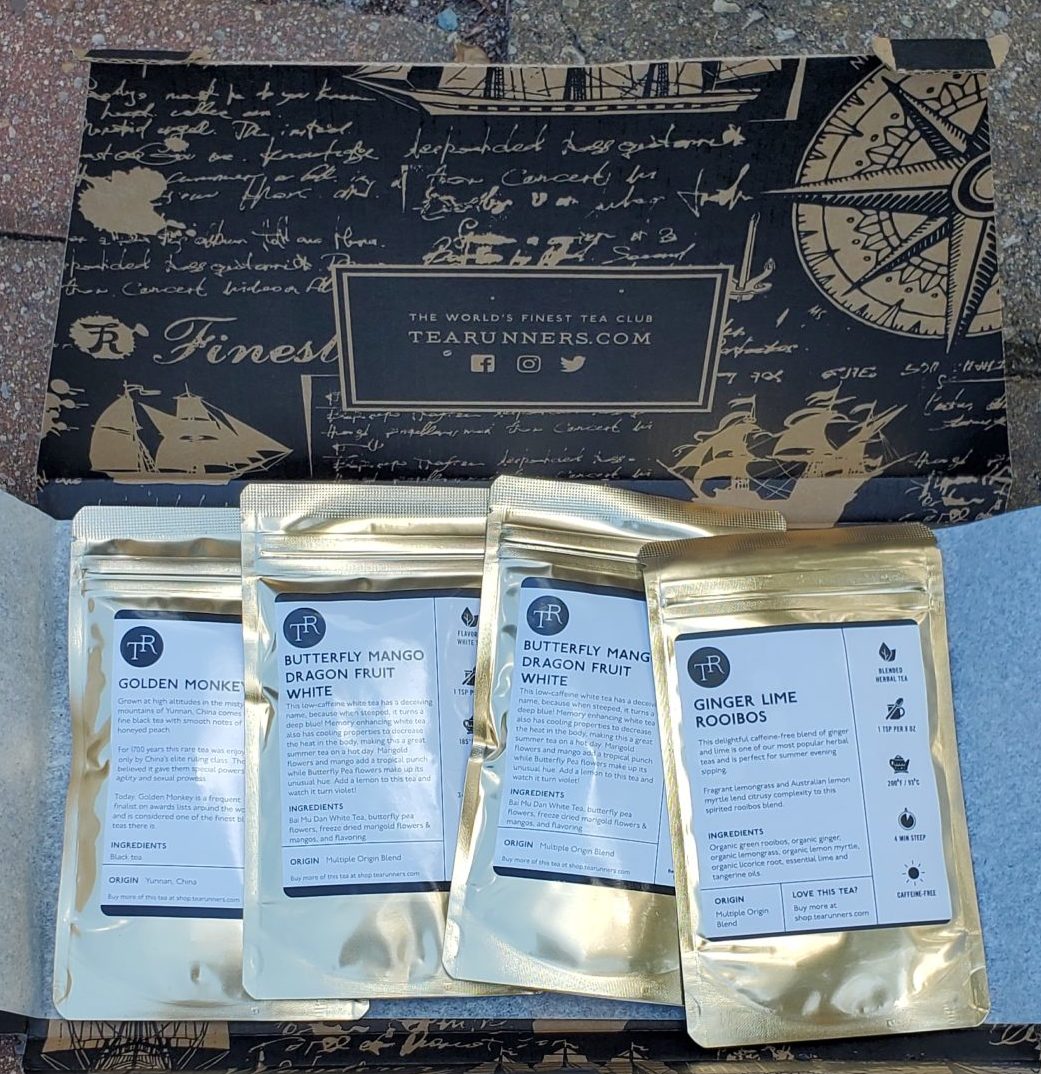 I could not seem to do right by this subscription box by Tea Runners. In the first month, I accidentally replaced one of the teas with a tea that was already in the box. I then really thought I would not have a good picture of the box since I only really had three different types of tea instead of the four. Then it renewed only a couple days after I received, the box renewed and I had another month on the way. So, I decided to make the best of it and actually mix and match the boxes. I will be reviewing two of their blends and two of their single-origin teas.

I bought the Original Box, which normally goes for $25 per month, which is a bit pricier than I normally do. When I found this company originally, they had a coupon available for $10 off. The Original Box comes with 4 teas of various varieties, but the company also offers a Pure Tea Box, Herbal Box, and an all-Black Tea Box.

How is the Packaging?

I loved the packaging that these teas came in. With a flat format, there was no wasted space or unneeded packaging. Also on the opposite side, there is a map-like graphic that is just beautiful. I dod not want to recycle it, but just keep and look at it. The individual pouches did a really nice job of keeping the strong aromas in. There was a small leakage, but I was still quite impressed.

What is the Sourcing Situation?

Many of the single origin teas listed their origin city and country. However, tea blends listed “multiple origins” instead of an actual origin. I appreciated their transparency for the single origin, but it would have been nice to see that carry over.

And Finally, How were the Teas?

Imperial Gold Needle: I loved this tea, it just warmed me up so much. It is a lovely reddish-golden color. I think as I drink more golden needle teas, it is harder to describe them for me. When this happens, I try and focus on how the tea makes me feel instead of kicking myself for not being able to distinguish teas. Like I previously mentioned, this entire tea made me feel warm, relaxed, and safe. There was something so comforting about it, that I just wanted to snuggle up in a blanket, look out into the rain, and just enjoy. There were the normal smooth character that I would expect from a more tippy black tea. As I dove into the tea more, I was able to sense a slight roasted or toasted element to the tea. As I was finishing up the tea, I referenced the packaging to see if there were any tasting notes that I would be able to sense as I was completing the review. They referenced the aroma as thick, and I would have to agree. There was a thick, malty sense that came to mind as I inhaled the tea.

Yunnan Pine Needles: I brewed this tea “Grandpa style” which means that I was lazy and just threw in hot water and the leaves. But I thought it made a beautiful visual as I was drinking it. The dry leaves had a very fresh aroma, and a slight nuttiness near the end, but not too sure on that last note. It seemed almost a bit sweet. As I brewed the tea, the aroma was quite vegetal and slightly sweet. Reflecting further, this tea might have been better to do normally because I drink slowly when I am reviewing. Either way, As I tasted this tea, I could taste some hints of grassiness and eventually, a bit of bitterness due to user error from my brewing style. I loved the look of this tea though, so so much. I do not drink green tea often, but I would totally drink this tea to just examine the amazing quality leaves. These leaves are full, and a bit tippy looking as I examine it more.

Ginger Lime Rooibos: OH MY GOODNESS, the aroma smells like some sort of fancy adult beverage. Or something just amazing. The lime aroma was so strong, it just filled the room when I opened it. When I brewed the tea, I also noticed that the aroma became slightly less but still fairly potent. At first, the ginger and the lime combination was the best dynamic duo while the tea was hot. However, as the tea started to cool a bit more, I noticed that there was an odd sweetness that came through that made the tea difficult to drink after a while. It almost seemed like a bit of a synthetic sweetness, but that was only super apparent when the tea was colder (aka I forgot I had tea and it was chilly)
Ingredients: Organic Green Rooibos, Organic Ginger, Organic Lemongrass, Organic Lemon Myrtle, Organic Licorice Root, Essential Lime and Tangerine Oils

Butterfly Mango Dragon Fruit White: I was so excited to try this tea, I accidentally bought it twice. The aroma when I opened the bag was almost heavenly. There is a certain candy that it reminded me of, but I could not put my finger on it. As I poured the water, it immediately had a blue tinge and over the steeping period, it turned more purple! I felt a bit sad because most of my butterfly pea flower tea turns purple instead of blue. The aroma of the steeped tea was quite different than that of the dry leaves, almost being a bit more white tea than flavoring. I am actually a little sad that the flavor did not have more fruitiness to it. I tried to make sure I had an even scoop of leaves to pea flowers, but it really did not blend together coherently. There was a bit of a sweet or tanginess to the tea, but not overwhelmingly so. The tea had a calming effect on my body.

Would I Purchase this Tea Again? (On Purpose this Time)

I have already recommended this tea to other tea friends, and find it very adjustable to all types of tea drinkers. Plus with the ability to customize, I find this as a good way to try different tea blends. Many of the teas in my boxes were ones that were not active on their website (they sold out or are not up yet). It is always nice to feel like you are one of the firsts or a special person because you were able to try teas that others may not. The price was a bit higher than I normally spend on subscription boxes, but I did find the quality of tea worth the price. So, yes, I would purchase again and recommend this tea (when the time is right).

Have you tried this tea subscription before? What was your experience? Besides the small hiccup in the beginning and paying for another month, I was really happy and surprised by how much I liked this box! As always, Happy Brewing!