Travel with Me | West Michigan 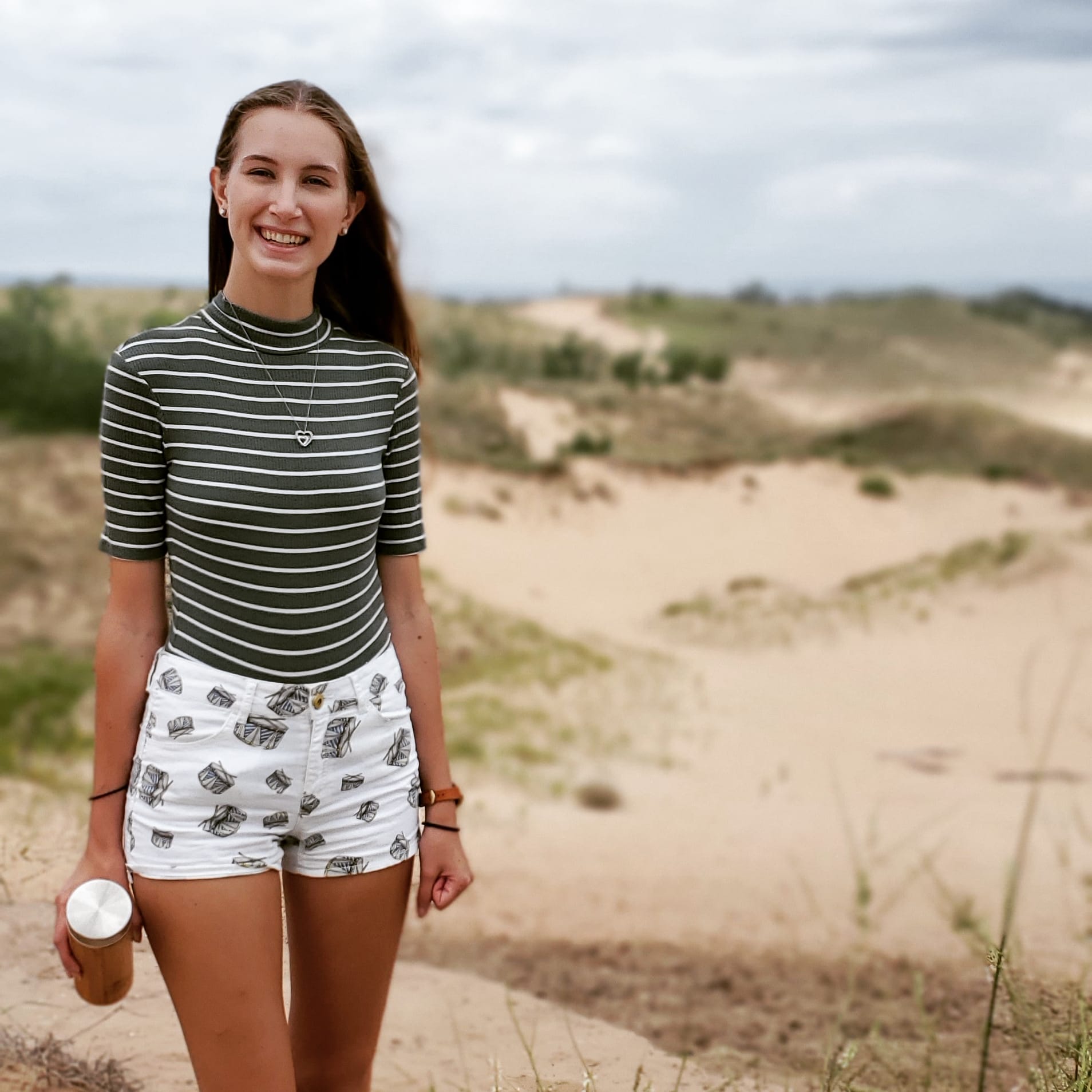 Travel with Me | West Michigan

Every year, my family takes one large vacation to spend some quality family time together and discover new areas. This year…was a bit different, for quite obvious reasons. Due to COVID, we stuck to traveling inside of our state since it is safer and to try to support our local economy. Another way this year was different, was that this trip would be a way to heal from losing our beloved cat, Cheerio, whom passed away two days before we were scheduled to leave. Travel with me and discover the major cities, hotels, and tea journies that I discovered on the Western Side of Michigan.

The first stop was Traverse City; one of my absolute favorite spots in Michigan. This place has such a rustic charm, and being that I am now old enough to drink, it also has some lovely wineries. If you are going here, I would totally suggest going to some wineries, the Sleeping Bear Sand Dunes National Park, walking around downtown, and traveling up to Leland. It is such a wonderful area and also has some wonderful beaches.

This was not a good start of the vacation. I walked into the room and…there was no tea offered. Zilch. Nada. Null. No tea, only coffee. This mildly irritated me, but no worries because I had brought many varieties of tea with me as well as our mini electric kettle. Very useful and I made many a tea with it. I actually emptied three of the 11 teas that I brought with me, I really used my tea tumbler from Bamboo Brew as well for tea on the go. Climbing those dunes would have been more difficult without some tea to inspire me (also made a good photo-op)

This hotel made up for the last one for sure, my sister and brother-in-law left so we downsized hotels and decided to try out a new one. Upon walking into the hotel (with our masks on), immediately to the left was a variety of coffees and hot water, accompanied by a large Tazo Tea selection. I am saying like at least 7 different kinds, chamomile, zen, earl grey, English breakfast, orange, etc. So many varieties. And then, when we got to the room, there were 2 Lipton Teas, 2 English Breakfast, 2 Earl Grey. 2 chamomiles, and 2 Zen Green Teas. Quite the stockpile (and yes, I took them with me. I am almost afraid of what the next hotel may or may not have). But needless to say, I was quite tea-ed up while at this hotel.

While walking downtown traverse city, I saw a company called Brew that mostly specialized in coffees (and alcohol). They did have tea lattes on their menu however, so I went for a London Fog. Now, I was slightly confused because they said they charged about $4 for a tea latte but added $0.50 for a London Fog and $0.75 additionally for almond milk. Aren’t we as a society past charging for alternative milk?! Alright rant over, it was a fair London Fog, but the one I had last year in Quebec will always be the best.

Another notable tea area was the Old Town Tea and Spice Merchants (not to be confused with the tea and spice exchange). They always have a wonderful selection and as it happened to slip that I was a tea blogger (either I say it or my family does), he gave my mom and I some cold-brewed tea to try, Lemon Black and a Cherry Herbal. Quite delicious. I bought my favorite lavender peach from them as a vacation souvenir and then went on my merry way. For some of my vacation teas, I found this Cherry Zip Tea from Benjamin Twiggs in a local store. It seems to be a product local to Traverse City. Unfortunately, the tea farm we normally go to when we are up here (Light of Day Organic Tea Farm) was closed for the season, so we will have to go online to refill our favorites.

Muskegon was our next location while we traveled along the Western Coast of Michigan. On our way, we stopped at the Silver Lake Sand Dunes, which are a small little gem along the way. However, coming from the Sleeping Bear Dunes, it can be a little overwhelming how much of this coast is sandy and pristine. When in Muskegon, we chose to investigate some battle submarines and ships, the farmers market and get some fresh and in-season blueberries as well as walk on the lovely sandy shoreline.

We lucked out for tea in this hotel as well, but I will dock some points for it being a Keurig tea. One night, there was Bigelow English Breakfast tea, and I drank it in the morning. It was fine…tasted like a Keurig tea. Due to COVID, we had to request the next batch of teas and coffees because the cleaning staff was not allowed in our room for the duration of our stay. Interestingly, we received a different brand of English Breakfast tea the second time, Celestial Seasonings. I will admit, I was hoping to have some fancier teas based on the absolute beauty of this hotel. This hotel is so beautiful and I felt like I was in the 1920s when driving up to it. Utterly amazing, so I was hoping for some…finer tea selection, but I am happy they at least had some options.

I bought a lot of teas to-go in this city. Firstly, at a local bakery, I ordered an Earl Grey and enjoyed that with my breakfast. As the day went on, we were headed back to the hotel and we randomly stumbled upon a tea shop: Banana Dog Loose Leaf Shop. (and by randomly, I mean that I had googled nearby teashops and there happened to be one along the road we were on). When there, I was greeted by a local cat, which really warmed my heart to be with such a wonderful animal. The store carried many lovely varieties of tea, and I bought a “Fifty Shades of Earl Grey” latte. I am still very much on a hunt for the best London Fog in Michigan. The lady at the shop also graciously gave me a small sample of their Apple Orchard Tea, which smells absolutely heavenly. Another notable moment in Muskegon was the Arnold Palmer that I drank with my fabulous dinner. Honestly, it was some of the best food on the vacation (there was a goat cheese and bean dip that was absolute heaven, and they made salad taste good!), and it was also the best Arnold Palmer that I have had in a while. Again, I was tea-d up and ready to get to the rest of my vacation.

Holland was our next destination and, as a little history lesson, was founded by Dutch Americans, which has heavily influenced the culture here. While it keeps the normal Western coast vibe in some areas, it has vast Dutch Heritage influencing the entire city (the Tulip Festival). I would really recommend going downtown to shop, going to the De Klomp Wooden Shoe & Delftware Factory (and next door is an awesome garden place to buy tulip bulbs), and to the State Beach/lighthouse. There also is a Chick-fil-a in this city, which we literally made a u-turn once we saw it.

This hotel was extremely nice and looked brand new, so I had high hopes for the tea selection. Well, that is until I saw the Keurig. It offered the same variety of the previous hotel, Keurig English Breakfast tea from Bigelow. Due to my parent’s love of coffee, they asked for more coffee and tea, resulting in me having quite a few of the little Keurig teas. I do not mind because I do take them home and put them downstairs next to our Keurig, just in case I ever crave tea and am too lazy to go upstairs. I ended up making this tea in the morning, but honestly, I do not prefer it as much over a good black tea that I had brought in my traveling tea stash. I believe I ended up drinking only half of it.

I did not buy much tea this time (or so I thought – future me), but I ended up getting tea at the small cafe we were at for breakfast while we stopped in Grand Haven along the way. This vacation seems to be Earl Grey consumption heavy, and it was no different for this breakfast. One funny moment was when my dad sent me into a store saying that there was a special tea brand that I might want to look at and possibly purchase. The tea brand…Stash. My mom and I had a good laugh at that one.

Once in Holland, my mom and I divided from my brother and dad and decided to shop to our heart’s desire. We found a home goods shop that had a lovely section of German imported teas in the back, to which I bought two teas: Wild Grey & Mango Tango. There were so many options and I had to contain myself, it was only $3.50 an ounce! I was absolutely so excited and found so many other exciting things in Holland; I recommend coming here 100%.

Our last stop of the trip was South Haven. This city is similar to other larger cities on the Western side of Michigan; there is a shopping downtown area, a lovely lighthouse, and beaches. However, there was also wine (which we know is my favorite after tea), so we ended up going to wineries and down to St. Joseph for the part of the day.

We had a few…cleanliness issues with this hotel, but they did decently in the tea department. In my room were standard Bigelow black and decaffeinated black tea. Downstairs near the eating room was a station that had some Bigelow teas that I would drink in the morning (of course, I had earl grey). I ended up using my kettle and trying out my new Mango Tango tea. The second night, I opened up one of the decaffeinated teas and consumed that (it was better than I expected honestly).

To be completely honest, I did not consume a lot of tea when in South Haven besides having an Arnold Palmer at dinner the first night here. But one major con was the shattering of my red wine, it affected me deeply. I went wine tasting to try and replace it, but to no avail (we found a store locally to me that had it, and we ended up replacing it).

Traveling right now is almost non-existent, so I was extremely happy and lucky to have taken this road trip with my family. I hope you guys enjoyed going on this with me, in a way, and are finding ways to discover new areas by you! Stay safe, and Happy Brewing!

Have you ever tried Olive Leaf tea? @specialleafc

How does tea fit in with your self-care practices?