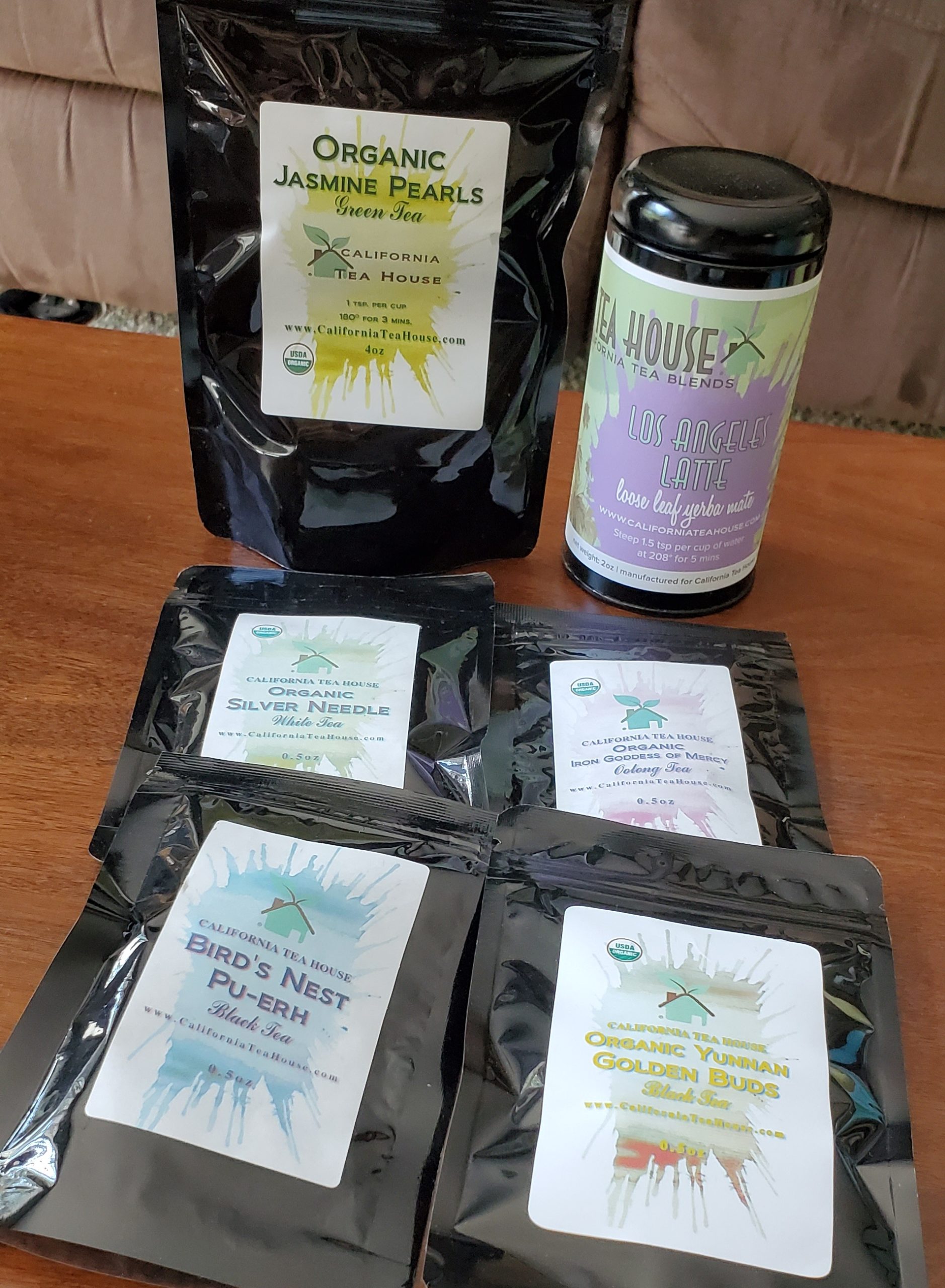 California Tea House is a tea company based in the US with a focus on providing consumers with the highest grade of hand-selected loose leaf tea. They reached out to me on Instagram to be a part of my Subscription Box Saturday series, to which I was pleased as punch to include them. They sent me their Only the Finest Tea Club, here were my thoughts:

This company gifted me the 8 oz version of the Only the Finest Tea Club. There is a 4 oz version also available for $21 and this 8 oz version is $40 per month. In my box, I received 6 teas, which was way more than I was expecting!

Their tea clubs come in 4, 8, 16, and 32-ounce options, varying in price accordingly. They also have different options for tea clubs such as Green Tea, Black Tea, Custom Blends, Pure Tea, and Only the Finest. While there are not many descriptions other than that or the ability to customize, there are a lot of options for tea lovers based on your preference.

How is the Packaging?

Four of the teas were in smaller bags, one was a full-sized pouch, and I also received one cylinder tin of tea. I did not notice the aromas of the teas really seeping out too much, but then again, sometimes pure tea is less aromatic than tea blends.

What Sourcing Information is Available?

After looking through all of the product descriptions on their websites, I found a few of the teas had sourcing information. The Bird’s Nest Puerh is said to be from the Pu-erh province near Yunnan, China. The Organic Silver Needles is said to be from the Fuding and Zhenhe districts of the Fujian province of China, also known as Bai Hao Yinzhen. The Yunnan Golden Buds mention China but do not directly state from China. I am unsure about the other couple of blends.

And…How was the Tea?

Organic Yunnan Golden Buds: I always go into golden buds with the same expectations about the consistency of flavor. The aroma of the leaves reminded me of a slightly sweet bark, with some lovely tannins peaking their way through that. The wet leaves did not leave me with much except they had a slightly astringent aroma. I used my gaiwan to brew this tea and was quite excited to see if it expanded the flavor of this tea. The coloring was an orangish amber color, with some lovely golden edges. After waiting for it to cool, the tea had some lovely nutty notes with a smooth and even taste that did not develop too much steep to steep. There was a bit of tang that showed up around the third steep as well as a couple of caramelly notes. The entire brew just had a super smooth character that made it so easy to consume.

Organic Silver Needles: This might sound stupid, but upon smelling the leaves, I really only picked up the aroma of like organic material/matter and not much else. Sometimes my nose just is so annoying and does not pick up some of the subtler notes. The leaves looked exactly how I would expect silver needle white tea to be, two leaves and a bud and quite tippy. The leaves were very impressive to me and kept their shape brew after brew, they had a lot of leaf integrity if that makes sense. I accidentally did the first steeping too weak, so I gulped that down and went on to the second. the color of this tea was a pale golden hue, maybe with some light brown undertones but as I continued to brew, the tea became a bit more of a golden-yellow. The tea had a very light taste with some floral notes that lingered in my mouth. There seemed to be a creamy texture to the tea, with a small bit of astringency on the 3rd steep setting in. After a few steeps, the taste note that I had noticed was a slight minerality.

Los Angeles Latte: This one was intriguing to me, I haven’t had too many mate blends. The aroma of the dry leaves reminded me of an RX Bar, with a maple chocolate aroma. I had high expectations for it based off of that. I immediately brewed a small pot of it. The taste of this tea was quite similar to hot chocolate and no taste of mate to be found, which really surprised me. The tea was quite smooth and naturally had a sweetness to it, but over time, it became a bit too sweet for my tastes. As well as smooth, there was a slight slickness to the tea, most likely from the oils of the cocoa nibs. After a while, I had to stop drinking it. I had gotten a slight headache, possibly from the artificial flavors of the tea.

Jasmine Pearls: Again, I used my gaiwan for this tea, this being the first time that I used it for jasmine pearls. The aroma of these leaves was not as strong as I expected. However, that changed as soon as I steeped the tea. The aroma of the brewed tea was very, very aromatic and floral, almost overwhelmingly so. It made me a bit nervous to drink the tea because it seemed a bit perfumey. As I went to taste the tea, my senses were filled with the floral notes and immediately my first taste tasted like strong jasmine with a small bite of green tea astringency. I have a feeling that because I used my gaiwan the couple of times that I drank this tea, it seemed a bit stronger, but it was almost too floral for me. I would say the taste was about 65 jasmine and 35 green tea taste.

Iron Goddess of Mercy: I tried this one a couple of times and each one was quite different. The aroma of the dry leaves did not give me much, but I noticed some slight hints of roasted notes and not much else. More came out when I actually brewed the tea, being smooth with some roasted notes and slight honey or granulated sweetness. The hue of the brew was a lovely golden hue with a slightly lightened edge on it. I started tasting the tea and ended up drinking this tea at least five steepings in my glass gaiwan. Honestly, I stopped counting after five and just let myself brew. My taste buds fought when tasting this tea between determining if this tea had floral or roasted notes. However, after each sip, a floral note really stuck in my mouth and lingered, making me think that this definitely was a floral note originally. One day I really need to figure out this roasted vs floral battle. After a couple of steepings, I started tasting a vegetal mix of seaweed and sweeter grass. A little bit odd, but it combined nicely with the floral notes. The aroma also changed and was less roasty. The character of this tea maintained smoothness throughout each steep. It was around the third steep that I started noticing a honey-floral note spreading across my tongue. I really liked this tea, and am already close to finishing the package.

Birds Nest Puerh: I tried this tea on Instagram Live, and ended up not taking any pictures. I will be trying this tea again eventually, but I have not gotten back to it for a couple of reasons that I will explain in a few sentences. It was definitely a ripe or shou puerh, the whole tea had quite earthy tones to it. As the tea developed, there was a slight mossiness as well to the Puerh. I was most surprised that the leaves were very fine, and that made it difficult for me to use my gaiwan, but I am not sure how else I would want to brew this. Due to the fine leaves, this tea was quite temperamental and would turn astringent at the change of a few seconds. But I think because of the fine leaves. this tea only lasted about four to five steepings. I am a bit nervous to try this tea again, digestive wise we did not go well together if you know what I mean. I will try it again to see if it was possibly something else I ate, but slightly traumatizing on my end.

Would I Purchase this Tea Subscription Again?

I thought this was a wonderful tea subscription, and I would love to try out different subscription tea clubs from them. I was pretty impressed by the quality of the leaves and the teas, even the couple blends that were included. For the price, I think $40 was a fair price to trying out different teas and getting 8 ounces of tea. One thing I would love to see from them is clearer ingredient lists on their website, as well as some fuller descriptions of their tea clubs. I would want to be able to know exactly how many teas I am getting with each club or quantity. But I was very impressed by this company from what I was able to see.

What did you think? Have you tried this company’s teas before or even one of their tea clubs? Let me know if the comments if you have! Happy Brewing!