Discovering the Power of Spice with DupisChai 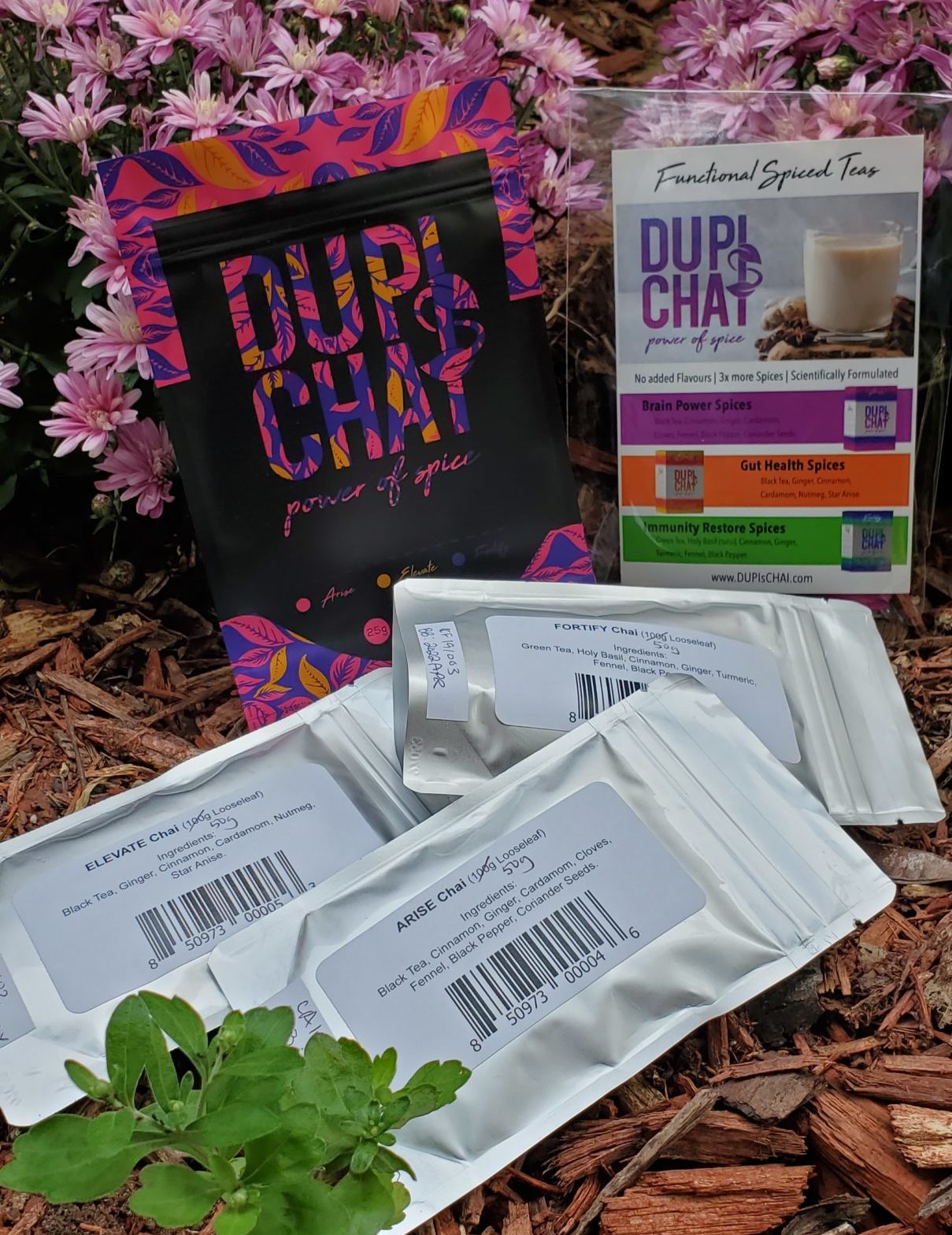 Discovering the Power of Spice with DupisChai

Dupinder is the founder of the Canadian Tea Company, Dupi’s Chai, and has the belief that functional superfoods that lead to a stronger mind, body, and spirit. After having her own health issues, she started researching and found out that oxidative stress and inflammation, and started looking into ways that she could help her body heal. Her company was born. They have a line of wellness teas designed for health, diet flexibility, quality, taste, and convenience. They sent me their three tea blends: Elevate, Fortify, and Arise. They also are a sponsor for my Advent Calendar Project. Here are my thoughts;

Arise: I made this chai over the stove and added oat milk and honey to the tea, while making my brother one as well. Immediately upon taking it off the stove, I was met with this lovely cinnamon aroma. I really enjoyed this chai, I really liked the spices and the way that the honey really embraced the spices of the tea. Without the milk or honey, the tea was quite spice driven leading with cinnamon, ginger, and cardamom. The oat milk and honey really calmed down the spices, but still let’s them shine through. My brother states “The chai was good” which was high praise from him. I actually did one other really fun thing with this was use it to also spice my chai and add the benefits to my drink.

Elevate: This one definitely is bolder and more robust in flavor. The spices stick out a bit more especially the ginger and cardamom. I really love the way it comes together though, I tried it by itself without milk and honey, and also made one to share (through the more traditional stove way) with my brother and fiance. The version without milk and honey had an aroma of cardamom and an almost creamy finish. As I went to taste the tea, I noticed that I could mostly taste the spices and less of the actual black tea. When I made this over the stove, I noticed that the black tea was not the CTC Assam but partial/broken Assam leaves. I think this might have resulted in the black tea notes being more suppressed. The milk and honey really “elevated” this tea, and yes I do think I am hilarious, which helped calm some of the spices and bring out a more blended taste. I really enjoyed this one, and my body did as well. I felt pretty light after this, which can be difficult considering my abdominal issues.

Fortify: I do not know if I have ever had a green tea-based chai-like tea. So, I was beyond excited to try out this one, and see how I liked it. This doesn’t scream typical green tea to me. There did not seem to be any typical green tea vegetal notes, but instead there is a really nice spice element with a lighter feeling than a black tea base. I was going to do both a normal and typical chai comparison, but I was advised by their company that this tea is typically drank without milk and honey. The aroma was heavy fennel and tulsi which wafted up and out of the cup when steeping. I love tulsi, so I was quite happy seeing that on the ingredient list. The taste did not have one ingredient more prominent over the other, I could pick out the tulsi and turmeric. The ginger could be more felt with each sip, which felt really nice. The fennel started to peak through a little bit as the tea cooled more.

Packaging: The first thing I noticed about this tea was the beautiful design of the packaging. The colors just scream happiness and wellness. The tea pouches kept the flavors nice and sealed, and I did not overly notice any aromas spilling out of the bags. The tea sachets in the samplers came in separate tea pouches for a single service, which also was so brightly colored and on-brand.

Sourcing: I can assume that the tea is sourced from India. It is not exactly stated, but it is hinted in the ingredient list.

Why do you consume chai blends? Is it for the health benefits, taste, or community behind it? Let me know in the comments below, Happy Brewing!

3 thoughts on “Discovering the Power of Spice with DupisChai”