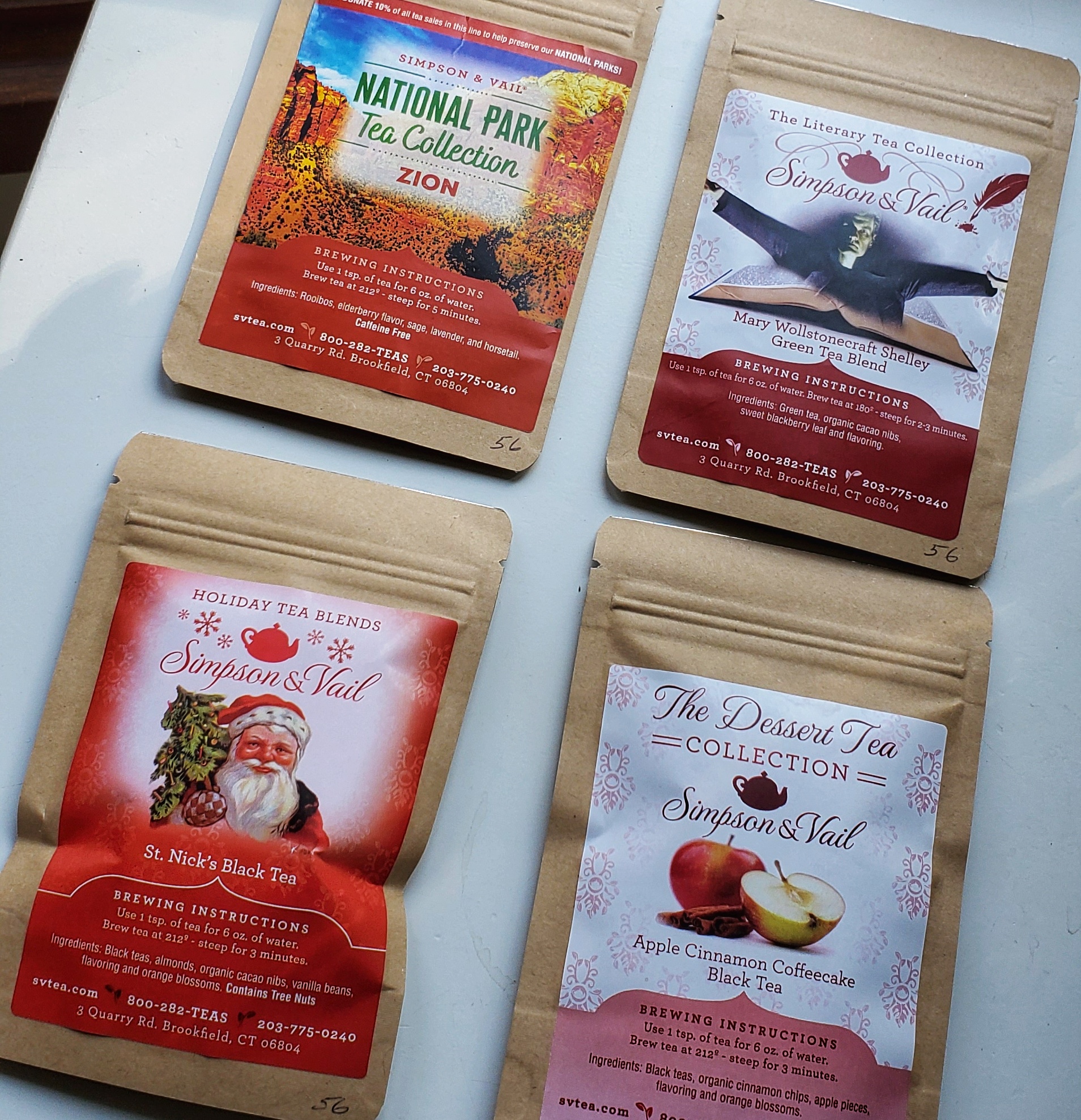 Simpson & Vail Tea is owned and operated by the Harron family and offers over 350 tea blends. It is considered one of the oldest tea companies in the US, and has a rich history. Their history starts in 1904 via Augustus M. Walbridge who was a green coffee merchant in New York City. Technically, Simpson & Vail Tea started in 1929 when Walbridge sold his business to his accountant, Mr. Simpson, and his tea taster, Mr. Vail. In 1978, the business was sold to the Harron family and it has remained with them since, carrying on the legacy of the business. They reached out and sent me four of their teas to review, three which are below and one which is saved for December. Here are my thoughts:

Zion: This blend intrigued me for a couple of reasons, the majority being that Zion National Park was my favorite when in Utah. I enjoyed it because there was greenery and life (and little caterpillars everywhere that we had to double-check each other before going into the car). So, I was interested in what tea blend they would pair with Zion National Park. The words which come to mind with this tea are subtle and light. The lavender cuts through to my nose as well as some lovely rooibos nuttiness. The aroma is honestly barely there, so it took a couple tries to get the full impact. It was lovely though. As I sipped the tea, it also seemed quite subtle and light. Just full relaxation. The color of the brewed tea was a lovely dark reddish-orange. After a while, the rooibos and lavender were the main elements of this tea that I could sense, with occasional notes of sage. This tea is part of their National Park Tea Collection which donates 10% of their sales (of this collection) to preserve US National Parks.

Mary Wollstonecraft Shelley: This tea was a trip down memory lane, but unfortunately, both my brother and I could not determine what exactly that memory was. The aroma was candy-like and very sweet, reminding me of licorice a bit. After a couple seconds, my brain started trying to identify the memory that the aroma spurred. Tootsie rolls?? The aroma of the tea and the dry leaves were very similar and aromatic. It taste honestly exactly like the aroma would leave you to expect somewhat perfumey. The natural flavors take over the taste of the green tea. Honestly, this one is not my favorite and I believe it is due to the balance of flavors. The natural flavors seemingly overtake the green tea and almost leave the tea a bit flat.

Apple Cinnamon Coffeecake: This was amazing. Coffee cake is my favorite kind of cake, but it has to be my grandma’s recipe. I love love love Coffeecake. The aroma is slightly nutty with hints of sweet cinnamon sweetness. I was taken aback by how similar the aroma actually smells of coffee cake. Of course, that only made me more excited to taste the tea. The first thing I noticed is that the tea was robust. There were hints of sweetness but a fairly solid tannin front. The first time I had this, there was an overwhelming taste of coffeecake. It was a deep flavor profile and incredibly complex. The second time was a bit more black tea front and the coffee cake flavor was not as apparent (still there, but more subtle). But that is how it goes with loose leaf teas.

Packaging: I love the packaging for these teas, they are very fun and brightly labeled. The tea pouch does let a little bit of the aroma out, but not to a terrible degree.

Sourcing: They do not give explicit sourcing information for each of their teas, but they do have some information that they source teas from China, India, Japan, Vietnam, Sri Lanka, Kenya, Nepal, Indonesia, Taiwan and Colombia.

I found the history behind this tea company very fascinating. When I had first heard of this company, I did think that they had a vaguely familiar name, but did not think anything too much of it. What are your thoughts? Happy Brewing!