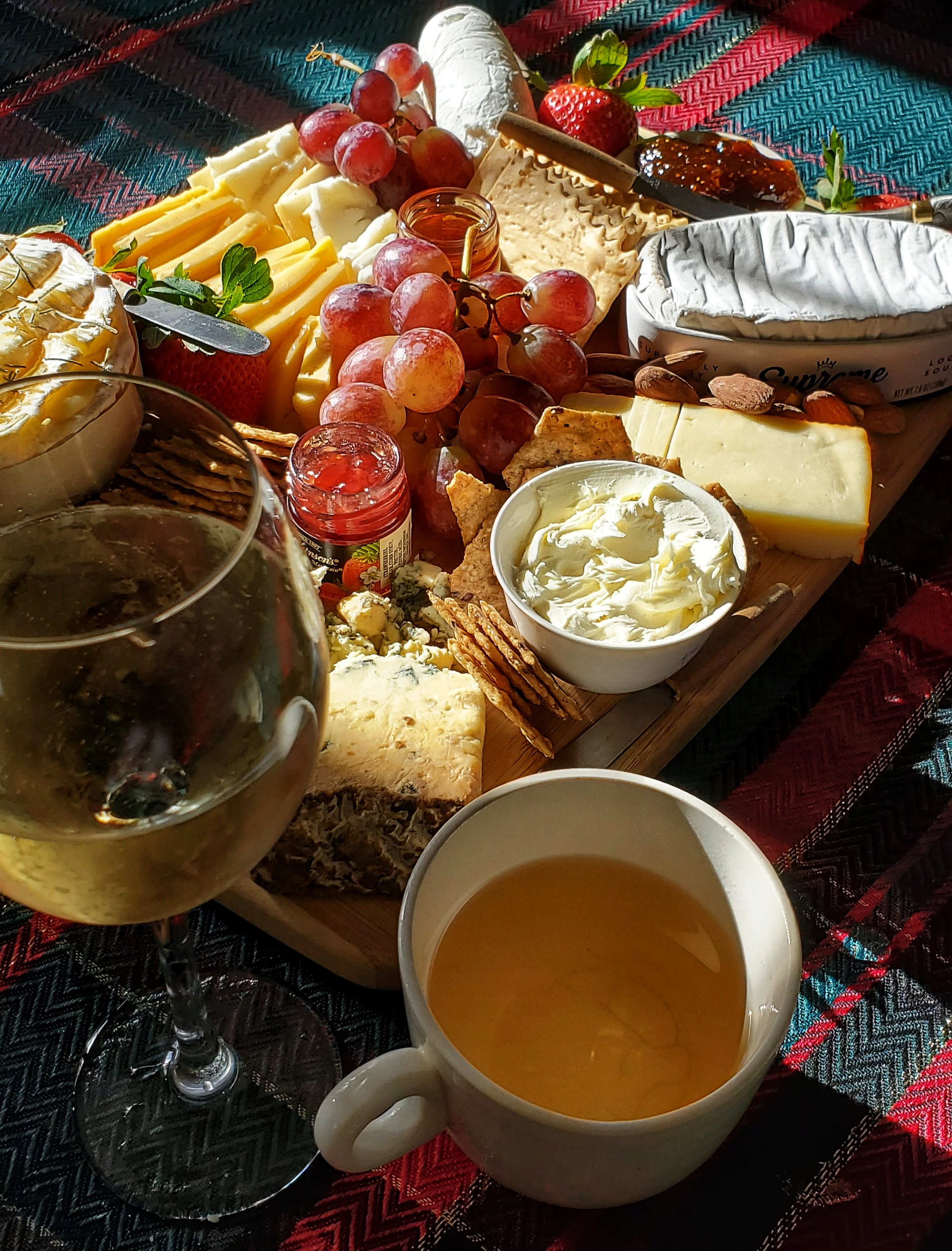 I tried my hand at pairing wine-inspired teas from Chado Tea and multiple kinds of cheese with my family. Chado reached out to me for another collaboration and after seeing this section on their site, I was convinced that this would be a fun and wonderful idea. So, they sent me three different teas and I went to work.

This was so much fun, but this experiment came with so many challenges. One thing I realized right away, was the differing opinions of what cheeses go with what wines. Everyone has differing opinions. Since I was basing my research on wines and tasting notes of teas, I had a lot of Google searching ahead of me. Another challenge that I had: I am lactose-intolerant, and I can really only have hard cheeses and goat cheese which are lower in lactose. So of course, I found this to be a fun event for my immediate family. Even if I cannot figure out which ones are the best, we would find out together (disclaimer: I totally broke my no cheese rule and joined in, and I have no regrets).

I had three teas: Sicilian Vespers, Assam Jungle Cabernet, and White Champagne Raspberry. Now, I have my assumptions of what these teas are supposed to represent, but my cheese pairings are going to be based around two parts. One is what the traditional wine pairing would be and the other is the cheese pairing with certain notes (Etc. Spicy, fruity, floral).

Sicilian Vespers: Initial thoughts about the aroma is floral and fruity, with a lighter feel to it. I related this instantly to almost a Sauvignon Blanc but my brother said a bit more to a Moscato based off of smell. The taste is more floral with a small hint of fruitiness which I assume is the cabernet flavoring.
Ingredients: White Tea, Osmanthus Flower, Royal Chrysanthemum Petals with Cabernet Flavoring
Potential Wine Identity: Souvignon Blanc, Moscato

Assam Jungle Cabernet: This tea had an aroma of cinnamon and not much else. The same was when it was brewed, it was heavy on the cinnamon front and was quite medium-to-heavy bodied. It was a bit hard to figure out what this one would be, I said just a normal Cabernet Sauvignon but my brother said more a port or sherry.
Ingredients: Assam Black Tea, Licorice Root with Cinnamon and Cabernet Flavoring
Potential Wine Identity: Cabernet Sauvignon, Port, Sherry

White Champagne Raspberry: Right away, this tea was a lot more fruity with only a small undertone of floralness. It reminded me a bit of candy honestly. The taste was quite similar and to be expected from the aroma. One thing that surprised me was how mellow this tea was. It just glided over my tastebuds and I love the feeling.
Ingredients: White Tea, Safflowers with Champagne Flavor and Raspberry Flavors
Potential Wine Identity: Champagne

Alright, so this is where it gets more complex. After thorough research (Literally 5 hours at least), I decided on my cheeses. However, be prepared that these could be totally off. I am basing off of assumptions and flavor profiles that are completely my own, and could be wrong. But it will be so much fun to try.

For Sicilian Vespers, I decided on goat cheese, mascarpone, and feta cheese. After thorough research, these teas tend to be good with white wine like sauvignon blanc. I think the richness of the goat cheese will complement the lighter elements of the tea.

For the Assam Jungle Cabernet, I decided on smoked gouda (I will be getting both normal and goat gouda), Camembert, and Stilton. These are a bit of wild cards to be honest, even after hours of research, there is not a lot of research on what cheese would go best with more robust cinnamon flavors (most recipes would try to give me recipes instead). However, some of these cheeses paired well with cabernet sauvignon and I went with some flavor pairings of more smokey robust teas. So, we shall see on this one.

For White Champagne Raspberry, I only have two: Brie and Muenster. Brie was a cheese that came up many times with sweeter wines and I might just also bring along a raspberry compote or jam to accompany the entire tea. The Muenster is a bit of a wild card as well, but it is said to be good with some of the vegetal components of the tea.

I gathered my immediate family which comprises of me, my parents, and my brother. I prepared the tea with a cold-brew which I put in wine glasses and a hot-brew which was put in white mugs.

First up was the Sicilian Vespers. There was a general consensus that the goat cheese was a bit too strong for the delicate white tea, but it did get a bit better with some fig jam. The mascarpone was very mild tasting, so it did go well, but it doesn’t highlight much extra with the tea. Drinking this tea hot completely washed out the mascarpone. I personally liked the combination with the feta. The funkiness and strength of the feta really paired well with the sweeter notes of the white tea, highlighting some of the more delicate notes in it.

As predicted, the Assam Jungle Cabernet was a bit tricky. We tried it with smoked gouda, smoked goat, camembert, and stilton. My dad loved the stilton cheese and said it went really well with the cold-brewed version. I could not stand the combination, but he enjoys that type of cheese more. None of the cheeses really clicked with me or the rest of my family. If the camembert was paired with a strawberry, and then with the tea, it worked. But it took a bit of extra help. I ended up trying to add mascarpone and it did go with the cinnamon notes of the tea, but I would not say that it actually paired super well or enhanced any flavors.

The White Champagne Raspberry was my greatest success. Both kinds of cheese paired extremely well. The muenster is more of a creamy, mild cheese and it just went extremely well with the tea in both hot and cold-brewed form. The slight difference of a slightly sharper cheese (in comparison with the brie) made the difference of sweet and sharp completely work. My dad still stated that the hot tea really washed all of the mild teas away, and I somewhat agree as well. The cold-brew version really allowed different flavors to come through. The brie also paired extremely well, more so than the muenster. It brought out a bit of the raspberry more so and did not completely wash away the tea with different flavors. I added a bit of raspberry and fig jam to the brie and it made a lovely punch of flavor with the tea. I would definitely recommend both of these pairings.

Honestly, I think I did much better than expected. Might there be better pairings out there? Probably, but this was extremely fun to put together and do so with my family. I am the type of person who really would take any excuse to do a charcuterie board, however, so it did not take much convincing for me to put this on with my family. I could see doing this with other wine-inspired teas or just normal teas in general. I do not have experience pairing teas together and it really took a lot of research (more than 5 hours) to fully come up with these pairings! What would you have paired with these teas? Have you ever paired any cheeses and tea together? Let me know! Happy Brewing!