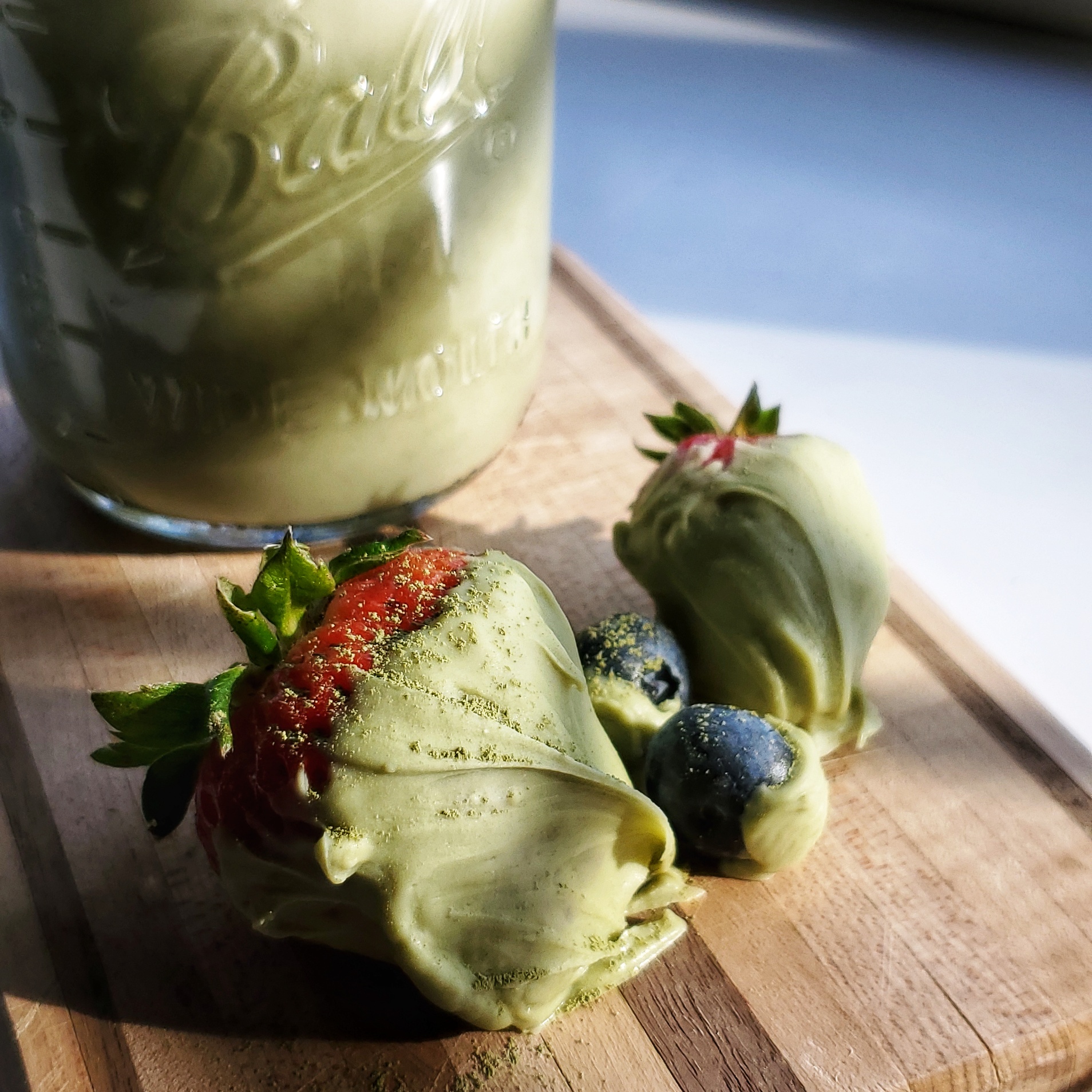 On April 19, 2021April 19, 2021
by Danielle
in Recipes, Tried & Tasted
Leave a Comment on Experimenting with Food-Grade Matcha | Andela Matcha

This matcha challenged me. Through my tea journey, I hadn’t yet reviewed food grade matcha. So this experience with Andela Tea challenged me to figure out the best way to use and report back on the matcha, while testing out multiple ways. Andela Tea is a matcha company specializing in (you guessed it) matcha! They have food-grade matcha as well as some self care products as well. They sent me their matcha to experiment with, here are my thoughts:

I tried multiple times to cook with this matcha. The first one, a matcha cake, did not turn out well (on my end, not the fault of the matcha) but the taste seemed suitable for my brother (who did not mind the texture). The texture of the cake was not there for me. So, I went for a less adventurous task of matcha and chocolate. Honestly, a match-a made in heaven. But it did come with it’s own set of challenges. The matcha powder has a yellow-green or light green coloring depending on what I put the matcha in. I made a double boiler situation on the stove, melting white chocolate and adding in the matcha when the chocolate was mostly melted. It created more of a lighter green. Using the matcha-chocolate, I dipped strawberries and blueberries first. I had some left over chocolate, so I scrambled in my cabinets to items to dip into the chocolate (I ended up using marshmallows). My absolute favorite is the blueberries, they were very crunchy blueberries and it worked really nicely to just pop the chocolate into my mouth and hear that snap.

The strawberries were also really good, matcha and strawberry is just a really good combination. So, I highly recommend. I do warn that this matcha had a bit more vibrancy to it and less yellow tones. It somewhat limits the usability if you are looking for that bright green factor.

As I was unsure at first how to proceed in reviewing the taste of this tea, I prepared it a few different ways. Latte and more ceremonial. The latte form was great. Its stronger, bitter flavor made for a really nice latte, complimenting with the creaminess of the milk. The green was a bit more pale and yellow than I was expecting, but the taste was spot on. I was a little harsher on this tea when judging it more in a pure consumption aspect, mostly because I am used to consuming ceremonial grade.

The powder has a pale, almost pastel green, appearance. The yellow tones made me pause when I first saw it, but I tried to not let its appearance set the tone for my review session. I noticed that the matcha had a hard time staying mixed together, the brewed tea had an appearance of darker hunter-green coloring. Right away, this tells me that I will probably use this tea in a latte or cooking form instead of straight consuming, which I did later. There was a distinct vegetal aroma that came up when I opened up the packaging of the tea. It smelled fresh, and I was surprised at how potent the aroma was. The notes I picked up were somewhere between freshly washed greens and spinach for a salad (sometimes the memory or specific taste makes me laugh when it is that specific).

The taste is a bit complex and changes every second of consuming. The first second is almost bare, with nothing really hitting my senses. Then, a burst of vegetal notes appear on the middle of my tongue, it is quite abrupt. There is a roughness and bitterness about this matcha which makes me believe it is more a food grade matcha rather than a ceremonial grade (which I did not know at the time of original consumption haha). The feeling of the matcha is also quite chalky on its own. I personally could not recommend drinking it on its own, but would say cooking or putting it in a latte form would be better.

Price: The price of this matcha is $10.99, which is a fair price for food graded.

Packaging: At first, the tea pouch was not my favorite (when I thought it was ceremonial). But as food grade, a tea pouch is absolutely okay.

Sourcing: I messaged this brand and they told me their matcha is sourced from Japan. I do wish that was more explicit on the website or packaging!

Additional Comments: I was not sure if I wanted to include this part, but it really impacted my perception of this experience. I was disappointed to see a post-like-looking review from me on their website stating words I never wrote and referencing to a post that I had never posted. It even put a number of likes to the “post” that was originally a delivery story-post on Instagram. I asked them to remove it, as the words are not mine and it makes it seem like I endorsed it without me actually stating any of the words in it. I was extremely disappointed, and it made be lose a bit of hope. They have since removed it, but I made the decision to include it so consumers can have the entire picture when looking to purchase.

What are your thoughts on food-grade matcha? Do you use it much or just use your ceremonial grade for cooking? Let me know in the comments! Happy Brewing!