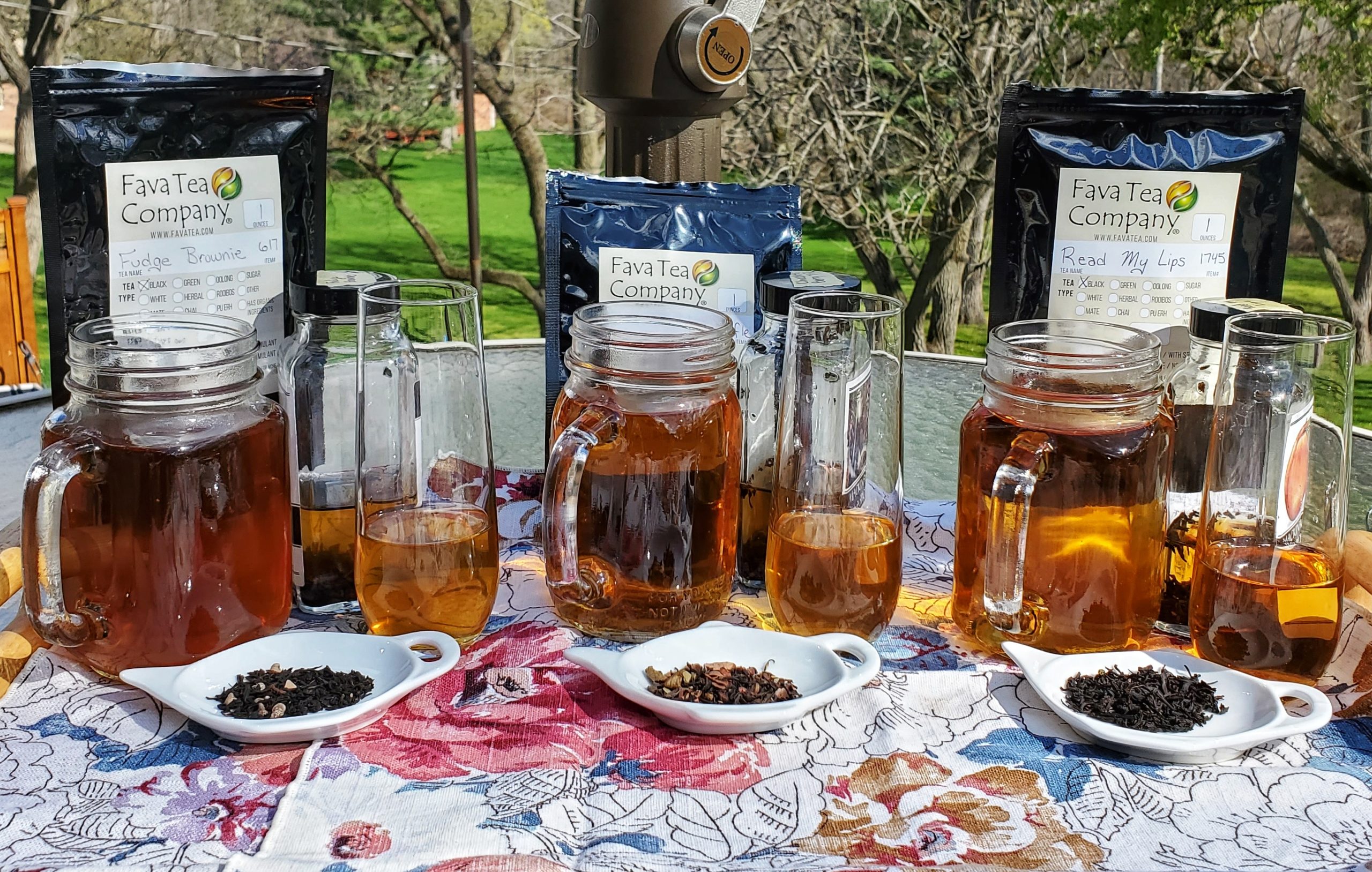 The people over at FAVA Tea are so patient with me. These three chocolate blends were sent over to me around Valentine’s Day but around the same time, I was overwhelmed with school, work, and getting surgery a couple of days after the holiday. I have been waiting to do something special with these blends, so I arranged a cold-brew and hot-brew analysis of the three chocolate-themed tea blends to do with my mother (the best tea tasting companion) on a lovely Spring day.

Cold-Brew: I laughed a lot when my mom was drinking this tea. She immediately went “mint”, “chocolate mint” and then “thin mints Girl Scouts cookie!”. It was crazy how different the peppermint manifested in the cold-brew version, it was extremely strong in the cold version. My mom made the comment after I read the ingredient list that you really could not differentiate the black from the green tea in the cold-brew, but she would have thought green tea.

Hot-Brew: My mom commented that the aroma was similar almost to that chocolate oil note, and I really could not figure out what exactly I was smelling. I could not really taste much in the tea, the peppermint was more subtle and developed more when I got into the tea. The tea was very creamy.

Cold-Brew: The cold-brew version had very chocolate forward notes in the aroma, but the black tea definitely showed up more than the chocolate. For me, this tea had a lingering note in the cold-brew tea that was part chocolate, but also reminding me a bit of a whiskey or alcoholic note. My brother popped in for a quick cup and said that this tea was “getting closer to a Mackinac Fudge Shop” and that it resembled rich chocolate, even in cold-brew form.

Hot-Brew: The aroma of this tea was extremely chocolate forward, much more than that of the cold version. The overall taste was quite uniform – homogenous almost, but the smell and taste were extremely similar. The black tea was extremely mellow, more medium-bodied but did carry a bit of malt with the tea. The taste of the cold-brew and hot-brew were quite different but held some similarities.

Cold-Brew: It is so interesting what different notes pop out when you cold brew versus hot brewing. I could immediately smell the berries and fruity nature of this tea over that of the black tea. It was fruity tea notes first and then the chocolate notes. My mom could sense a note that she was not sure quite what it was, but later realized she could taste a more nutty almond-like note in the tea. . My mom and I noticed that this tea did have a slight drying effect when drinking. My brother came entirely out of the left field and said this tea reminded him of chocolate chips and oatmeal?

Hot-Brew: My brother said that the aroma was more like apple cinnamon to him but he was not super sure, which is why he probably associated oatmeal with it (he usually eats the apple cinnamon oatmeal). I found the aroma of this tea to be so potent. I could smell the aroma from across the table when my mom was scopping out the tea into our tasting glasses. It was incredible fruity, a mix between cranberries and raspberries. My mom said it reminded her a bit of a chocolate covered berry. The chocolate was not as strong as the other blends but the black tea continued to hold that mellow quality. There was a deep warmth to the tea as I drank it.

Price: Fudge Brownie is priced at $3.65 per ounce. There are two blends are out of stock currently, Read my Lips is $4.25 per ounce and Chocolate Berry Trifle for $12.64 for 4 ounces.

Packaging: The packaging of this tea was quite normal, being a tea pouch. I did not notice any tea aroma leaking from the bags. They are tea bags that can be used for any kind of their blends.

Sourcing: No sourcing information is available from what I can see.

What are your thoughts about chocolate tea blends? Some people are quite torn on them, loving a few and disliking others. Where do you fall? Happy Brewing!