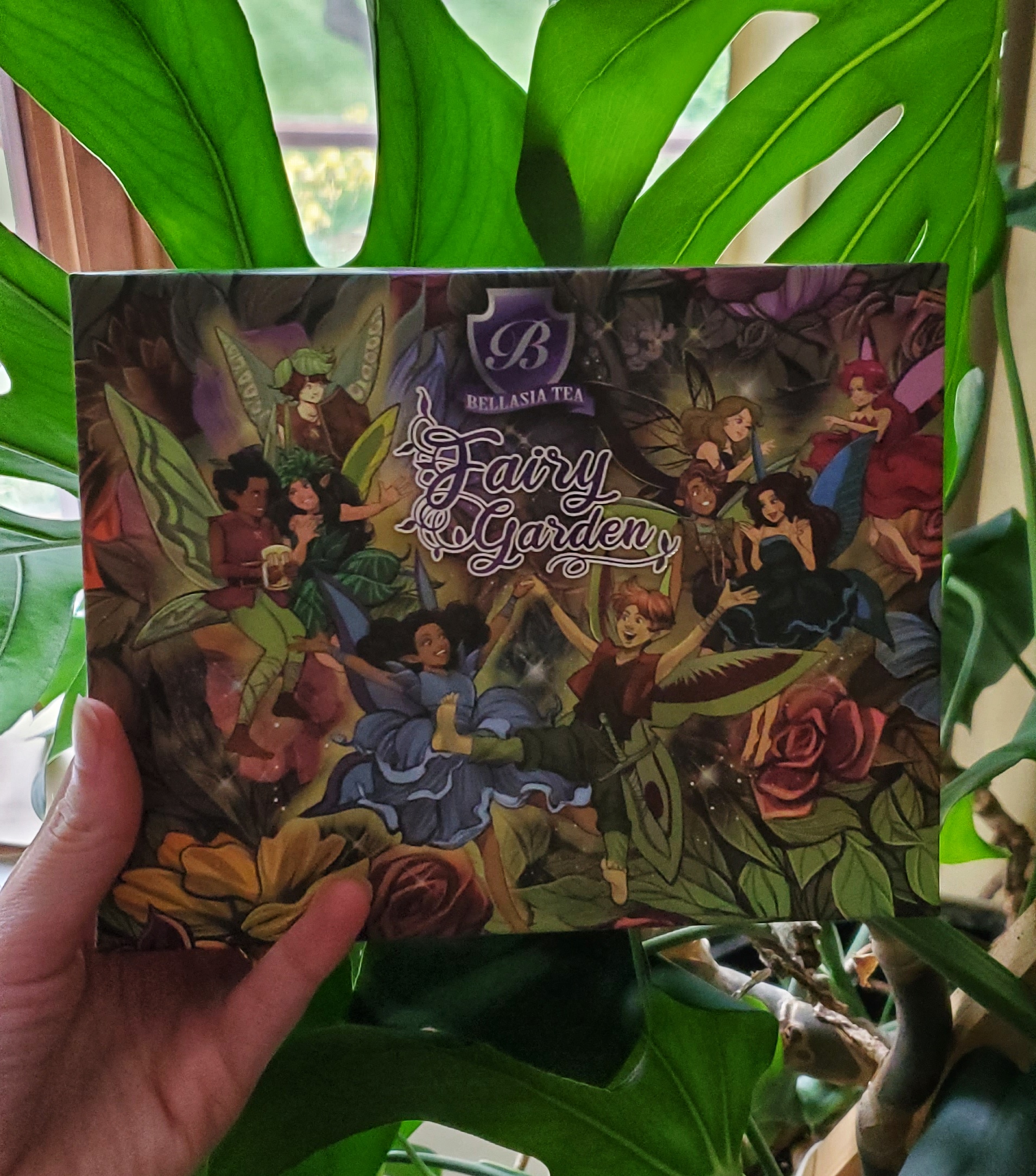 The idea of Bellasia Tea came from Mercedes, the founder, wanting to find a tea that was healthy and made for kids for her daughter’s tea parties, as well as wanting to make a character that was relatable for her adopted daughter. After searching, she could not find any princess-related tea. So, Mercedes created an entire business around tea for children included six royal tea blends and a corresponding kid’s book. I met Mercedes at the Chicago International Tea Festival and we further formed a relationship over Instagram. She sent me all six of the royal teas and the book, previously. This time, I am looking at her new Fairy Garden Blooming Tea Flowers. Here are my thoughts:

Dragon Fire Flower: My 1st thought is that the smells are incredibly peachy and sweet. The aroma just from the ball alone is very potent and you can see the small little hairs on the tea leaves which I was very impressed with. While pouring the water the smell of peaches and almost a nectarine aroma floated up to me. I realized after that I was supposed to use boiling water and instead used green (175 degrees Fahrenheit) but decided to carry on with the tea anyway. The color was a nice yellow, and the flowers were beautiful when they popped out of the ball. The first initial taste was similar almost to passionfruit or tropical fruit. But still did have some of those peachy notes to them. It was quite lovely to sip on. There were moments that I thought there was a bit of astringent bitterness, but it quickly passed and was very nice to drink. There were almost greenish elements to it.

Wizard Cauldron Flower: The color of this tea reminded me of a creamy golden yellow. As it brewed, I noticed that the tea was not as fruity and potent as other teas. It does not really smell like cherry, but I cannot identify in the brewed tea what the notes are at all. The individual aromas did not really stick out too much but blended together. The taste of this tea was like fruit, almost like a pit fruit. Which I guess makes sense since a cherry does have a little pit, but not as fruity as a cherry. It was good and nice to drink, but I would not say that this was my favorite of the bunch. It was a lot more subtle. The leaves were whole and they bloomed extremely well. I was a bit lazy and just let the flower sit in the water after pouring a cup for myself. It did have some heavier or more prevalent notes of green tea or the feeling of green tea. This one kind of perplexed me. There was a creaminess to it, and a decent depth, but it really did not overly call itself out to me. It was fine to sip on, but infuriating to review.

Dancing Fairy Flower: This tea smelled, tasted, and overall just reminded me of straight strawberries. The color of the brewed tea is a warm yellow but has almost peachy pink subtle tones to the color which was very beautiful. Overall, it was a bit cloudy but I think that was because of the breakaway leaves from the blossom. The aroma is incredibly potent and fruity. It just smelled amazing, I used boiling water as suggested and brewed for about 7 minutes. There was no astringency and it was mild and fruity. I did not taste any green tea or white, but there was a similar characteristic that I could tell there was tea in it. I really enjoyed this one. The taste was so similar to the aroma. It was almost like sweet strawberries and reminded me a bit of when you go strawberry picking and the aroma just rises up to your nose. It is a heavenly smell. Just all of this reminded me of strawberries and I loved every second of it.

Princess Isabella’s Flowering Tea: I brewed this tea in a large teapot, different from all of the other teas. The color of this tea was a pale golden yellow and was quite clear. I brewed this tea at a green tea temperature, 175 degrees. At first, it was very light and almost airy. As I brewed a large pot of tea, it was less potent initially than the other blooming teas. The taste was good, it was quite similar to the strawberry and again, I almost felt like at certain times there were slight almost lingering astringent notes. This is odd considering the lower temperature and the higher temperature I brewed the other teas resulted in a brew that was extremely mellow and did not have that slight feeling at all. For this tea, when it was hot, the raspberry fruity note took the front seat. But as it cooled down, the green tea was much more evident. Some sweeter kind of vegetal note peaked through and took it over.

Pricing: For 12 Blooming Flower Teas, the price is $24.99. I think this is fairly standard, more towards the higher side of the blooming tea side of things.

Packaging: The packaging is very on-brand for Bellasia. However, like typical blooming flowers, the packaging is normally just a thin aluminum foil. This is not the best way at keeping the aroma in and the tea the freshest, but with the box closed – it did better than I expected.

Sourcing: There was no sourcing information available on their website.

What are your thoughts on blooming tea? I find these to be best for special occasions, not just for the average tea-drinking day. I definitely have to be in the right mood to drink it. What about you? Happy Brewing!