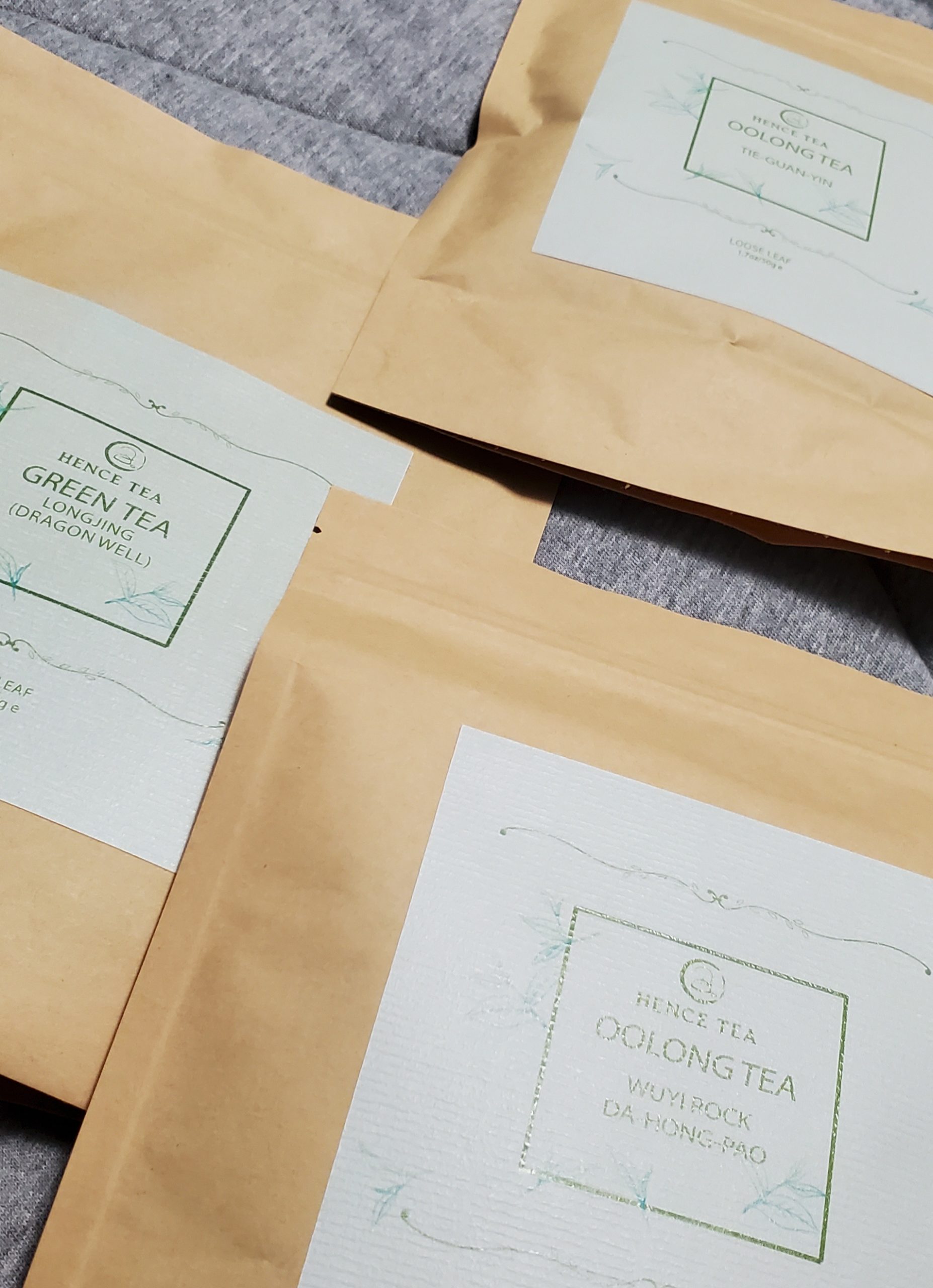 Hence Tea is a tea company based in Los Angeles, founded in 2018. The founder Jack had started a Southern California-based tea enthusiasts meet-up group and sourced Chinese teas for them to try. Based on the feedback and success, Hence Tea was born. They are focused on bringing high-quality teas in small batches from Chinese farmers with years of tea cultivation experience and bringing the culture of Chinese tea with it. They sent me three of their teas: Longjing, Da Hong Pao, and Tie Guan Yin. Here are my thoughts:

Longjing (Dragonwell): This was my first time-consuming dragonwell, and I was beyond excited to try it. After some initial research, I decided to brew this in a grandpa-style brew and then I refilled it when it got low. The only hard part was sipping on this tea without the tea leaves slipping into my mouth. The leaves were perfectly flattened and had almost a lime green appearance to them. The aroma was sweet almost like hay or just the beginning of grass trimmings, but it also reminded me a bit of that aroma you get when the cereal bag is opened. It was kind of grain-like (or maybe nutty?) but sweet. The color brewed was a light green, and the tea leaves in the glass only enhanced the color. I personally found joy in spinning the leaves around in the glass and creating a spiral with them. I was not sure what to expect on the taste since the tea leaves were not being removed but I was delighted to find that the brew was not super vegetal. There was a nice mix of toasty and nutty notes which surprised me. But overall this tea was extremely mellow. I was really struggling to find what kind of specific notes I was tasting since this was the first time. It held a long savory finish in the mouth and was not astringent or drying. Quite a lovely experience for my first cup of this tea.

Da Hong Pao: Dark Oolongs make me want to read a book in a window while it is storming out, it just gives off that kind of vibe to me. The heaviness that they often have brings really lovely cozy feelings to the consumer and this tea was no different. The dry aroma was quite roasted and dark, having an almost char-like note sticking around as well. As I brewed the tea, some sweeter tones came through with an almost acidic feeling on the nose. Overall, the aroma was quite full-bodied and nice to stick my nose into. The first thing I noticed about this Da Hong Pao was a specific note of slightly roasted, like a wet wood almost but also a specific note. One very unique characteristic of Dong Ha Poa is this cinnamon note that kind of subtly creeps itself in. I was surprised that upon my first sip I could already detect it in the tea, which honestly I always look for but can never actually detect normally. This was a pretty medium-bodied tea and you could almost taste the entire tea process in each cup. I would brew this tea alongside working and it proved a wonderful pick-me-up for the mid-day.

Tie Guan Yin: I have found that Tie Guan Yin has been a tea that calms me and brings me extreme clarity. I often find myself drinking while working for an extra moment of zen before diving back into a project. The aroma of this tea was creamy, bright, and sweet. It also held a slight minerality note that I associate with tie guan yins. After a few infusions, I noticed the aroma turn sweeter with an almost syrupy feel to it, finishing up with some floral, orchid notes. The color of the brewed tea was a pale, yellow-like color, at times looking slightly tinged green as well. When studying the leaves, I noticed that they did not seem as tightly rolled as I am used to. They seemed a bit looser, but I was still optimistic about this tea. The leaves also were a nice dark green. I did a short first brew to just start the leaves off. The taste was extremely light but very smooth and nice. It was creamy and held some vegetal notes in it. It was very clean tasting and quite smooth. After a few infusions, I noticed that along with the aroma, the taste had a very sweet element to it.

Packaging: The tea was stored in typical tea pouches with a small plastic insert in the back. I could not detect any aroma from the top or sides of the bags. I plan on keeping these stored in the dark, so the plastic insert did not bug me.

Sourcing: This company is fantastic at providing the district, city, and country of origin. I am extremely happy with the sourcing information that they provide to their consumers.

What is your favorite Chinese tea? Mine varies from time to time, but Chinese Oolongs definitely hold a place in my heart for sure. Let me know in the comments! Happy Brewing!