From Mountian to Table | Taiwanese Oolongs from All Day Tea Club 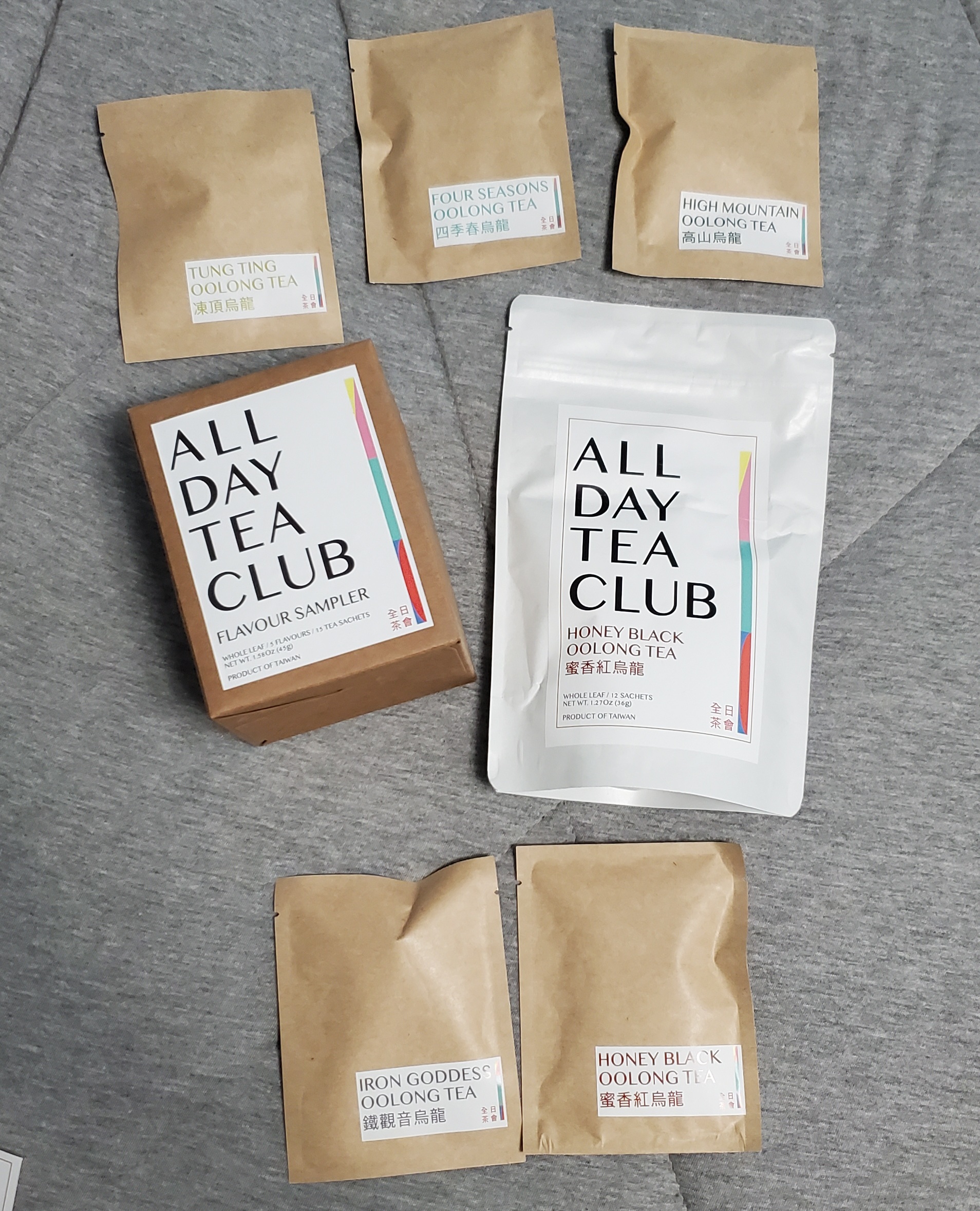 From Mountian to Table | Taiwanese Oolongs from All Day Tea Club

On September 10, 2021September 11, 2021
by Danielle
in Tried & Tasted
Leave a Comment on From Mountian to Table | Taiwanese Oolongs from All Day Tea Club

From Mountian to Table, All Day Tea Club brings authentic Taiwanese teas to consumers! They believe that drink by drink, tea is what brings people together. Acting as a symbol of welcome, a connection between land and people, it brings different cultures and consumers together over a common purpose. All of their teas are single-origin sourced, brought to you from the Mountains of Taiwan. The owners visited the tea farms where they source their tea from to fully understand the process of tea production and educate themselves so they can help their consumers. All of their tea is whole leaf and comes in tea sachets so everyone can enjoy it. They sent me their Tea Sampler Pack full of five of their oolongs to try. Here are my thoughts:

Iron Goddess Oolong: It has been so long since not using my gaiwan for oolongs, that I was not sure what to expect when just using a tea sachet. This is rather narrow-minded of me, I will admit, but I was curious to see how this experience would go. The aroma of this tea was toasty, almost like pecans. It smelled incredible though and my mouth watered a little bit as I took it in. The brewed tea was a light, clear golden color with some slight orange edges. As i drew in for my first sip, I first noticed a roasted note and a lot of flavors. Again, I wasn’t sure what to expect, but I was very happy so far. It had medium-bodied toasted notes reminding me of cedarwood or freshly cut wood. After a little bit, I noticed some slight drying in my mouth, but nothing too intense. I ended up using hotter water for my second brew, which really drowned out a lot of the flavor. I would recommend using 190 for each up and only slightly increasing the increments of temperature. I looked at the leaves after two cups and was excited to see whole leaves. After two 3-minute steeps, the leaves still were quite compact and had more to give. I ended up throwing them in the fridge with some water to try and cold-brew the rest. I also realized that there were a lot of leaves in these pyramid sachets.

Honey Black Oolong: I was intrigued by this tea since I had it both in loose leaf and tea sachet form. These kinds of oolongs are supposed to be a bit darker due to the fermentation process. This specific tea is fermented for 24 hours and should result in a darker color, with a full-bodied flavor. I noticed that the aroma of this tea was slightly minerally and sharper, as it cooled I noticed just a hint of honey to it. The color was definitely more dark than many of the oolongs I tried in this bunch, but still had more of a dark yellow appearance with darker amber-orange edges. Upon the first sip, I did not really taste much, but it was extremely hot. It really only had those key oolong characteristics to it and nothing that I could pull out. So, I let it sit for a little and came back to it. I think it is lighter on the spectrum than I was expecting, but just a hint of honey sweetness. There was a very rounded feeling to this tea and warmed my insides right up. It was extremely smooth but I think it was missing the depth of black tea that it was slightly trying to copy.

High Mountain Oolong: Right away, I realized I might not have used hot enough water. I drank this one while working and my desk water heater only boils water, so it was a trick of timing to get the water off in time. It immediately brewed a pale green-yellow color. It was very pretty to look at honestly. I noticed immediately from the aroma that this tea was incredibly creamy and velvety in texture. There was a very slight vegetal note almost like snap peas, but it was very light. And finally, a little bit of floral broke through as well. The complexity of the aroma made me excited to take a sip, and I was not disappointed. The tea had a creamy, milky texture in my mouth. It was extremely floral, reminding me of violets or some similar flower. I boiled my second steep and ended up putting it in a container to take to my class, but I forgot it on my counter. The next day, I drank it and it was very floral, crisp, and refreshing.

Tung Ting Oolong: This was my first experience with Tung Ting Oolong, so I was interested in how this tea would taste. The aroma was super roasted and toasty warm. It was not like pinenuts but more like toasted rice. It reminded me a lot of genmaicha toasted rice, like almost identical in my mind. It brewed a lovely clear golden-yellow color. It reminded me quite a bit of Autumn and just like sipping this on a cool crisp Fall morning. I noticed some roasted floral notes while sipping on this tea, something like orchid-like floral notes. Again, I noticed those rice-like characteristics in the tasting profile as well as a slight bit of minerality to it. It reminded me of a green oolong and just had typical notes that I associate with high mountain oolongs. It was incredibly mild with each sip, just almost calming.

Four Seasons Oolong: The last of the five, I think this was the most delicate of the five. Even to its color, it was a pale green-yellow color. It almost lacked a bit of color to be honest, until the last 30 seconds of brewing. The aroma of this tea was very light and floral. It had a silky, clean, and smooth feeling to it with each breath. And near the very end, it finished with a slight honey aroma, sweetening it all up. I again sipped on this tea while working and noticed some really nice medium floral, almost barky-like notes. It held a bit of minerality that affected both the taste and texture of the tea, but it mostly held a lot of creaminess to it. Like the aroma, there was a very slight natural sweetness to this tea that made it enjoyable to sip on. I did notice a minute after taking a drink that there was almost an iron-like note in my mouth. Looking at the leaves after, they looked whole again and had darker green coloring. I thought about this after a few steeps, but I would take the leaves out of the tea sachet after a few steeps to really allow them to finish expanding. That would allow you to cold-brew or grandpa-style brew, which would let the leaves really expand.

Pricing: These teas can be bought individually or in a Tea Sampler Pack, which is $18.99. The individual teas are priced as followed:

Packaging: I was given the Tea Sampler Pack and a package of the Honey Black Oolong, so the packaging for this is slightly different than full packs. One small complaint that I have about the packaging is that it is not resealable for the tea bags.

Sourcing: All of these teas have a place of origin, roast percentage, harvest season, and elevation available for consumers, which is absolutely awesome.

What do you think about oolongs? I have found such fascination and appreciation for Taiwanese oolongs and the different variations that exist. Happy Brewing!