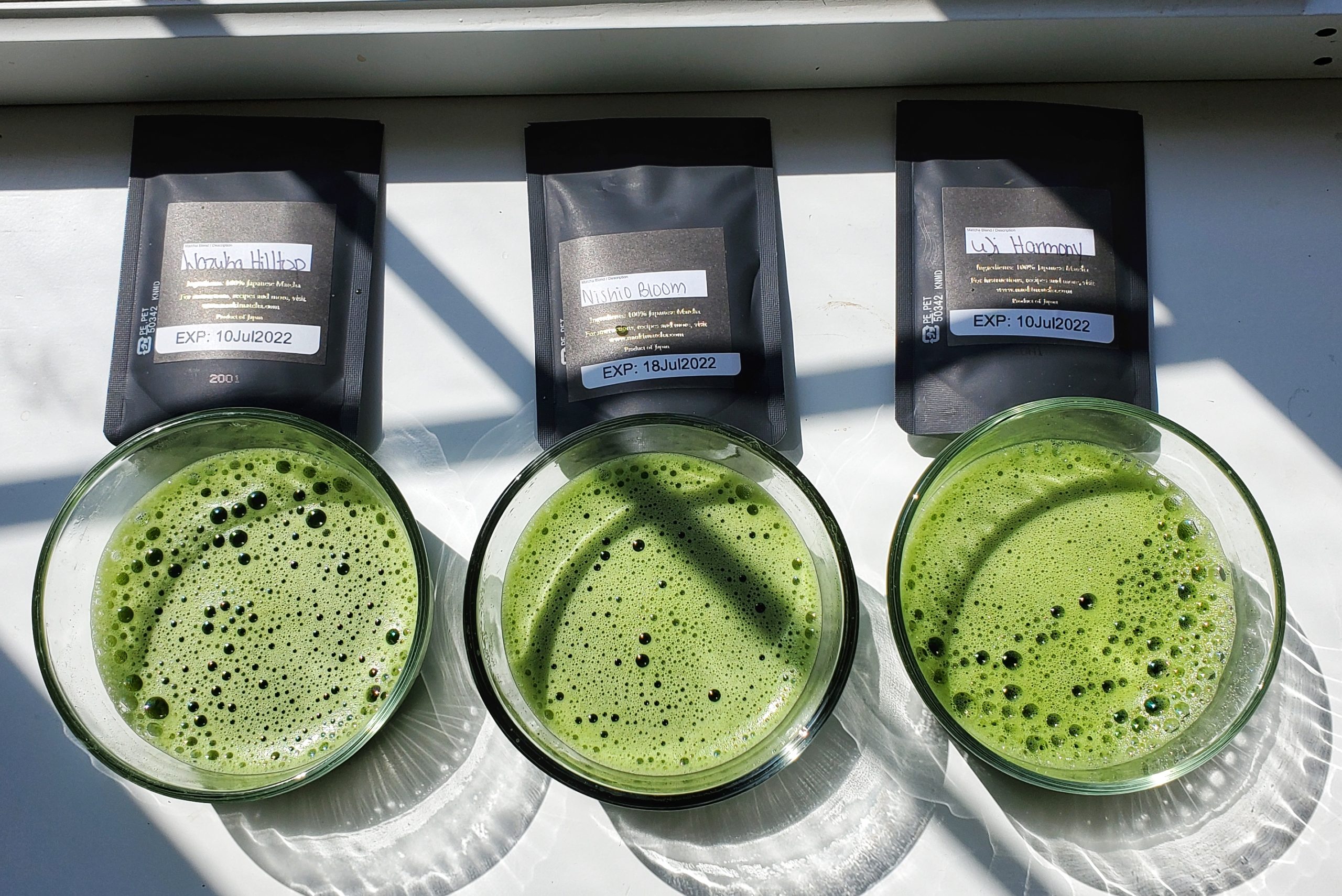 On September 13, 2021September 12, 2021
by Danielle
in Tried & Tasted
Leave a Comment on Comparing 3 Different Matchas from Naoki

When looking at matcha, there is definitely a lot of different options available on the market. It surged in popularity in 2015 and increased the number of tea shops offering matcha. However, being highly unregulated, ceremonial or culinary standard matcha became blurred in some companies. Naoki Matcha saw how matcha experienced a popularity boom and sought to fix that by offering a versatile and cost-effective matcha series that allowed the consumer to enjoy matcha in traditional and non-traditional ways while sharing the knowledge they have accumulated so far. Another difference is the way that they source their matcha, working with a network of tea estates instead of just a few single ones. This allows them to change based on feedback from consumers. I have worked with Naoki Matcha before, and have also bought their matcha for family members because I believe they deliver exceptional quality of matcha. Therefore, when they reached out for me to try their Masters Collection Matcha Set, I was psyched. Here are my thoughts on the three different matchas:

This matcha was the very first one I tried on its own and in my three matcha tasting sitdown. The matcha had a nice green coloring – bright green and brewed a beautiful color darker green. The first thing I noticed was a very grassy aroma, it was quite apparent and jumped out of the glass bowls that I used as my temporary chawans. The taste was quite interesting, and I will explain why. The first sip startled me with a poignant zing. It was like a zap of green astringency and herbaceous notes, but then mellows out in the middle and leaves almost no lingering notes. It is a bit odd. I literally had no lingering taste from this. It reminded me of a clarifying in-between in meals, which is odd considering the beginning hit of vegetalness. It evens out in the end, I guess. I have had some pretty astringent matchas before, and this is not quite like that. The bitterness, even though prevalent, has some creamy elements to it that almost keeps a lot of the edge off of the teas. It took a bit of getting used to, but I did come to enjoy it by the end. It is really interesting the lack of lingering notes, the experience of each sip really only lasts about 4-5 seconds. Transitioning from that mild jolt of vegetal and then weaning down with some almost familiar notes of maybe snap peas. And then ending up with a creamy finish before nothingness.

When drinking with less powder, this was quite enjoyable. I think this tea is a bit more temperamental and perhaps really dependent on the powder/water ratio. While I did not measure either, I did notice that I used less matcha for my second cup and it was a lot more enjoyable.

This matcha had a very similar green vibrancy to the others, so really, all three got high remarks on the quality of matcha powder color. The aroma reminded me immediately of pinenuts, and it was somewhat addicting to continue sticking my nose into the matcha to see if there were any other attributes to the aroma. The aroma just held notes of something nuttier and made my entire mouth salivate. I had written down salad because it weirdly made me crave some sort of salad honestly (which I did actually go and grab after). The taste was also quite lovely, with some nuttiness and savory feelings peaking in. As I sipped, I noticed a lingering taste on the tongue and that the matcha leaves a very warm feeling on the back of the throat while sipping. After a while, I noticed almost savory pea-like notes as well in there. It was very mellow and did not hold much astringency. I used 175-degree water but did not measure how much water or matcha I used, I just went off how I felt. This was actually my favorite of the three based on the aroma, and creamy nutty taste it held with little astringency. I believe this is because of how different it was compared to the other matchas I have tried.

I saved this matcha for last when tasting, and really I was surprised by how much variation each of these had. Again, the matcha powder was a lovely bright green with no yellowness in sight. This matcha had an aroma that reminded me of hints of smokiness (very subtle) and was a lot darker in character and more savory than the others. However, the taste was quite different, almost a 180 degree turn from the aroma. Right away, my taste buds called out creamy, sweet, and rather bright tasting notes and experiences. It was quite mild with no astringency that I noticed. It almost felt a bit weaker than the other ones and not as strong, however, I did acknowledge in my notes that that could be due to not enough powder or different water ratios. It had a thicker consistency in the mouth compared to the other matcha. The finish on it was a really lovely savory note that stuck around my mouth. My body felt slightly more alert and recharged when consuming this one. This matcha took second for me. It was quite nice to sip on but the second matcha brought a more uniform experience which I enjoy in my personal matcha practices.

Price: The price of this Masters Matcha Collection is $50 for three 20-gram matcha packages. I think for a more specialty product, this price is expected but does require a small investment into these matchas.

Sourcing: Each of these matchas are named from the region they came from. Uji Harmony from Uji, Kyoto, Japan. Wazuka Hilltop from Wazuka, Kyoto, Japan. And finally, Nishio Bloom from Nishio, Aichi, Japan.

How often do you practice in your own tea ceremony and consume ceremonial matcha? Would you try this Masters Matcha Collection? Let me know in the comments below! Happy Brewing!