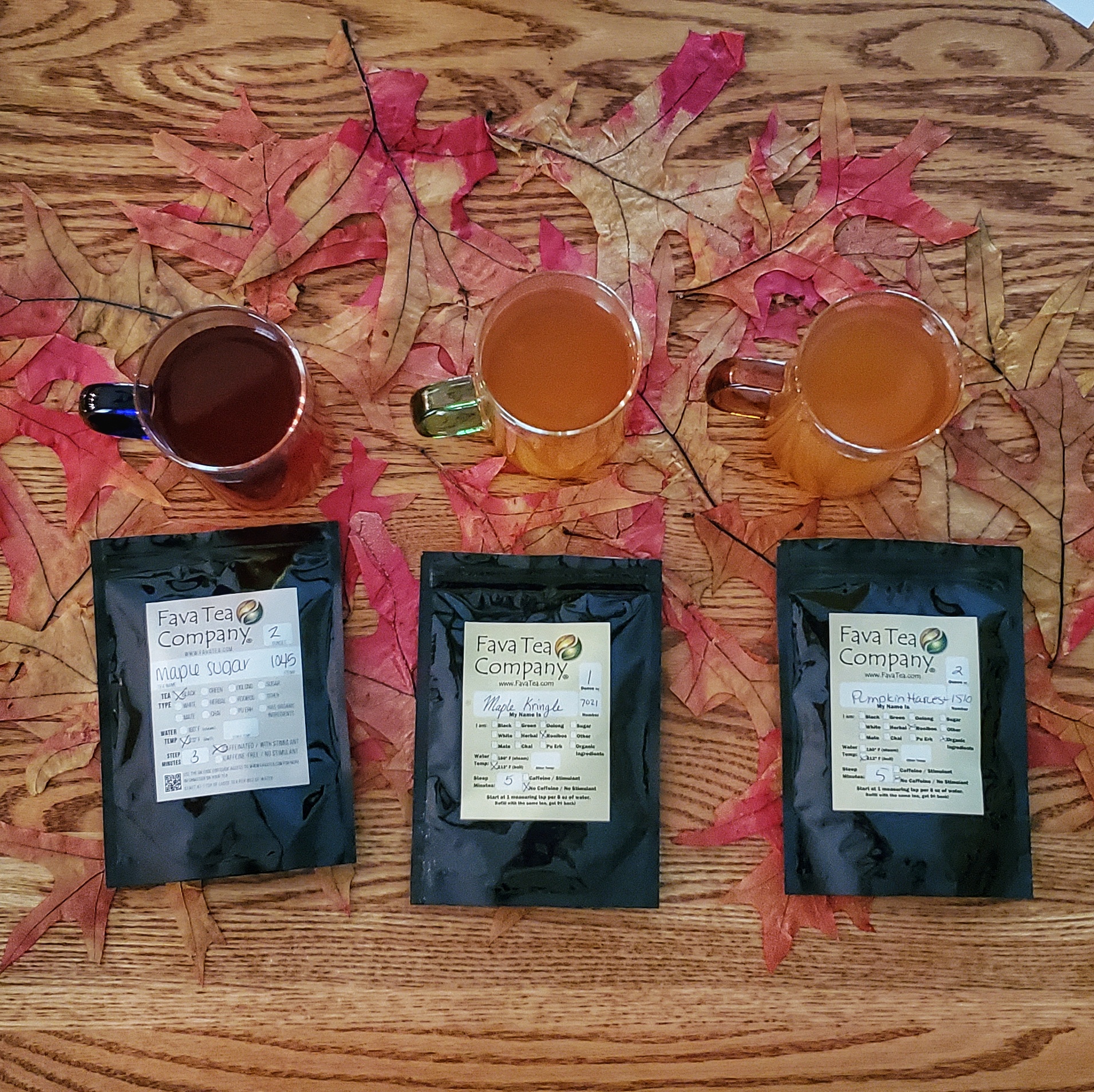 We are in the midst of Fall, and I am finally getting to drinking some fall teas besides the odd cup of chai here or there. FAVA Tea sent me more of their fall blends, some new and some old friends, to try out. The blends in this tea-tasting trio are Maple Kringle, Maple Sugar, and Pumpkin Harvest. I gathered up my brother and my mom, and we set forth on a tasting adventure. Here is how it went.

First up, we tried the Maple Sugar tea, deciding to start caffeinated and ease into the herbals. This one ended up being my mom’s favorite of the bunch. The aroma had extremely strong maple notes in – especially on the ladle that I used to scoop out the tea. However, the tea had some cocoa and hazelnut notes that crept in on the back of the aroma and were more prominent as the tea cooled. We had a general consensus that the tea was not overly sweet but held a really nice natural sweetness. However, we differed on the main notes of this tea. My mom tasted mostly maple notes and thoroughly enjoyed the entire experience of drinking the tea and smelling the aroma as she was doing so. I instead tasted stronger cocoa nibs notes and really did not taste the black tea. The maple was not as evident to me. The tea had a mellow, smooth and almost buttery consistency to it, mainly which I thought was from the cocoa nibs. The color of this brewed tea was a darker orange-brown color, that was semi-clear.

Now, I had this tea last year for fall so I knew a bit of what to expect. But I did have a new experience and thoughts about it. The aroma reminded me of apple cider and a bit of what we thought were cloves (we figured out later when we looked at the ingredient list was that it was actually more of a nutmeg note). My brother said the aroma reminded him of a fall candle, again apple cider scented. The tea itself was quite spiced and had a bit more of an apple taste than the maple that I anticipated. It had a sweetness at the end of each sip, but it again was not a maple taste just…sweetness. The tea doesn’t have a heavy rooibos note in it, but just overwhelming cinnamon, cloves, or allspice notes to it – like pumpkin pie spices. It really was a good combo. The tea was also quite creamy and subtle. The only weird thing about this tea was after it cooled a bit, there was almost a soapy-like note which I think is the stevia leaf honestly.

Out of the three of these teas, this fall blend probably was the least favorite of the three which was the general consensus of me, my mom, and my brother. The aroma was a bit surprising, being more like citrus spice – lemon or orange. It really promised some lovely notes in the taste, but it seemed like it was missing something when I tasted the tea. There was a little spice kick in the back of my throat, but the overall taste was mostly spice. It seemed like it might be a good mix with some apple cider but on its own it seemed like it had too much spice and not enough pumpkin. My mom did claim that she could taste some citrus notes. Overall, this one just seemed a little bit lackluster from what I remember.

Pricing: All three of these teas are priced as $4.25 per ounce of loose leaf tea.

Packaging: The packaging of this tea was quite normal, being a tea pouch. I did not notice any tea aroma leaking from the bags. They are tea bags that can be used for any kind of their blends.

Sourcing: No sourcing information is available from what I can see.

What fall blends have you been getting into? Let me know in the comments! Happy Brewing!